Back in April Mo and I attended Peaky 2013, the freeform writing weekend. We both had a blast, and you can read all about it here. 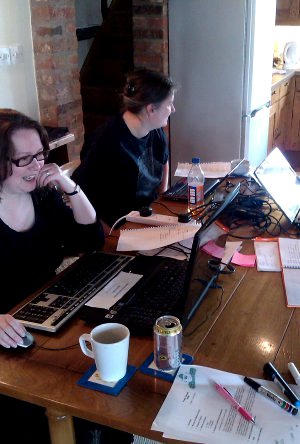 Hard at work at Peaky

Without going over too much old ground, Peaky is a weekend for writing and running freeforms (a bit like our murder mystery games, but they often don’t have a murder) in a friendly environment which encourages experimentation and lots of fun. It’s a great way to try writing a freeform if you’ve never done it before.

Anyway, we’re doing it all next year. Mo and I have already signed up – and now you can too!

The Peaky Games committee have just announced that sign ups have started for Peaky 2014 are open for everyone. (If you’re a member of Peaky Games sign ups opened a month earlier.)

The price includes accommodation for three nights (Friday to Sunday – although many people leave on Sunday evening) and all meals apart from Sunday evening (which is usually a takeaway). Bring your own alcohol and something to write with (a laptop is best).

All you have to do to book is send £50 to Peaky Games (if you want to pay by Paypal you have to pay slightly more to cover Paypal’s processing fee). The details are on their website. (I’d also strongly recommend signing up for the mailing list.)

So, registering to sell goods on Amazon is pretty straightforward. You have to register separately on amazon.co.uk (which also covers .fr, .de, .it and .es), and on amazon.com, with different email addresses: but that’s not too bad. To sell on .it and .es you have to have a bank account in Euros, which we don’t have, so we didn’t do that: .fr and .de are able to convert payments into pounds. Not sure why that is, but we don’t sell many games in Italy or Spain anyway, so no harm done.

The first tricky aspect we found was on trying to list our games. Amazon require that a product to be listed must have a universal identifying code – either a barcode or an ISBN. Both of these are jealously guarded by issuing authorites, who you have to pay good money to in order to be allowed to assign codes to your stuff. And it takes time. It was a good few weeks before the ISBNs we registered for all of our games were processed and showed up on the system, and so we could list them on Amazon accordingly.

The second tricky aspect was that Amazon believed all our games were actually books (because of the ISBNs, presumably), and so insisted on listing them in the Books section, and imposing the standard Books delivery charge (£2.80) and schedule. After a bit of pleading and badgering, we managed to get amazon.co.uk to change the listing to Games: but they still wouldn’t remove the delivery charge and schedule, instead they just changed them from the Books charge to the Games charge (£4.11). And amazon.com had still not managed to do even that by the time we pulled out, although they sent a daily ‘your call is valuable to us’ message. We decided to reduce all the cover prices by £4.11: so people ended up paying the same total as they would have if there hadn’t been a delivery charge.

It was now October, and amazon.co.uk had warned us that if we didn’t sell 25 games before the end of the month, then they wouldn’t let us trade over the Christmas period: because, to avoid potential customer disappointment, they only wanted reliable and proven traders on the site at that time. This seemed fair enough, but it put us under a bit of pressure! We put on a 20% discount on all the Amazon prices, and encouraged our existing customers to go there to make their purchases, rather than our own website.

This worked well, and sales started coming in. Unfortunately complaints started, too. When you buy a game on our website, you can download it right away. When you buy it on Amazon, though, they send us an email. Only when we’ve read that and processed it can we send you the download link and password. Because we’re a small business, we’re not watching the email 24/7, so it can take several hours to respond. A few customers got quite concerned and impatient. Then there were others who wondered why we were setting a delivery charge for a download product. The answer was ‘Amazon won’t let us remove it’, but that sounded feeble and unsatisfactory.

Finally we were contacted by amazon.co.uk itself. They had noticed that what we were selling was actually a download rather than a ‘Game’ as they understand it, ie. a physical object. They said that as a small trader, we were not allowed to sell digital goods, other than via the Kindle (which is not much use to us, as you can’t print files out from it). We would have to either switch to selling physical goods, or else withdraw. And the same would apply on amazon.com (if they ever got around to replying to us).

So, that’s how it ended. We’re not set up to produce and ship hard copies of our games, and the price wouldn’t be economical. We have the option of burning the files onto CDs and selling those, in the ‘Software’ department rather than ‘Games’: we will look at that. But for now, we’ve just pulled out of the site, and are concentrating on making our own website work better for you!

(Also on the plus side, we generated a whole set of new ‘book’ images to represent our games. The old ones were getting a bit long in the tooth… see below for the contrast between old and new versions.)