I talked about our three golden rules recently, in the context of hosting Cafe Casablanca. However, there were two other rules that I use as a GM or host:

First, if possible, always answer a query by sending a player to another player. ( I believe that it’s more fun if the players interact with each other than spend all their time with the host.) 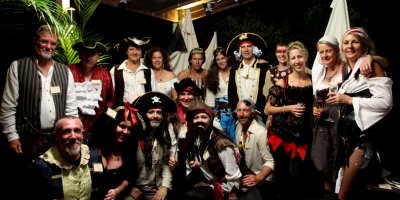 So in Death on the Gambia, for example, if a player asks you a question that another character could answer (such as the Captain), then direct them to the Captain and get them to ask.

Second, when running a rock-paper-scissors challenge, I try to determine what each outcome (win/lose/tie) means before starting the challenge, rather than try and figure out what happens afterwards.

The problem with rock-paper-scissors isn’t usually success or failure, as it’s often fairly obvious what happens in those situations. The problem is to create an interesting result for a tie – repeating the challenge is pretty dull.

So I try to make sure that I clearly state what the outcome of the challenge will be before we do the challenge. And if I can’t think of an interesting result for a tie, then I’ve found that the players are often more than willing to help me think of something.