In our larger games we recommend an assistant host to help run the game. For example in Spellbound, it can be particularly useful to have another host run the library while the “main” host deals with the rest of the game.

Similarly with the larger games having another host to help with pickpocketing or combat can be helpful – particularly if the several players need the host at the same time.

However, some rules can be managed by the players themselves (perhaps overseen by a trustworthy player). For example, combat doesn’t require secret knowledge, or an awareness of the plot, and so could be something that the players manage themselves. On the other hand, I wouldn’t recommend allowing players to manage pickpocketing – that’s something a dedicated host needs to do. 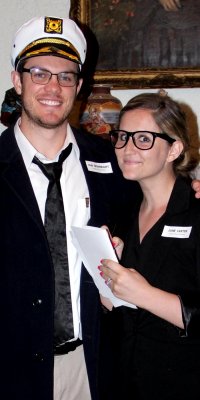 Here are my tips for getting your players managing combat.

First, I wouldn’t get everyone to manage combat. Not everyone needs to know anything about combat – generally only the “dangerous” characters need to know something about it. so I would choose a small number of trustworthy players to become helpers. Ideally they would be playing characters that I didn’t think likely would be involved in combat to keep the relatively neutral in the conflict they are overseeing.

Second, I would share our standard combat rules with those players.

Third, I would encourage them to practice the combat rules before the party itself, so that they understand how they work and any problems and misunderstandings can be ironed out. Ideally I would do this a couple of days beforehand, but if that doesn’t work you could simply schedule a training session before the party. I would also explain that I wouldn’t expect them to adjudicate combat that they are involved in themselves – they should either find me or one of the other helpers.

Fourth, during my introduction I would ask the helpers to identify themselves. That way the other players know that they can ask them for help if I am busy.

Fifth, I would just keep an eye on combat during the game, just in case there are problems.

Sixth, as part of my debrief speech I would thank the helpers for their help.

We’ve also included other standard rules, including capturing player and poison, but I think that it’s combat that has the most potential for getting other players to help with hosting.