But as this chart from Google shows, rock paper scissors has soundly thrashed scissors paper stone. So it’s time to change. But we’re not going to rush into it. We’re a (very) small team with a huge to-do list. So for new games, and as we update old games, we’ll make the change.

So why do we use rock paper scissors for our resolution system?

We use rock-paper-scissors in our murder mystery games for several reasons:

(By the way, we don’t use rock-paper-scissors-lizard-spock (or any of the other variants) because it’s neither well known nor intuitive. And we don’t need the added complexity.)

But I’m not very good at RPS?

One of the downsides of RPS (and perhaps it’s biggest failing), is that it isn’t completely random. There’s a psychological angle – people aren’t completely random. Here’s a clip of Derren Brown winning time and time again against football fans. (And here’s a blog post analysing Derren’s technique.)

This article from the BBC highlights some strategies that players adopt that prevent the game from being completely random.

So now you know that, you can use this information to beat your friends. (Unless they’ve also read the article, in which case all bets are off.)

In fact, if you’d like to test your skill, try this RPS simulator.

And if you’re still uncomfortable playing rock paper scissors, I picked up these dice on Amazon. 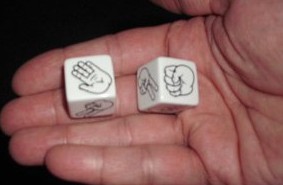