I’ve wanted to publish our murder mystery games in book form for a long time now, so I’m particularly pleased to be able to say that Way out West is available from Amazon. 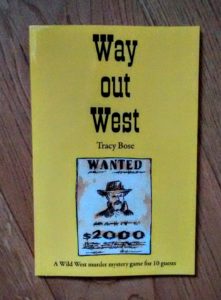 One of the problems with publishing a murder mystery game in book format is that you can’t actually play the murder mystery without destroying the book. So that means either providing a CD with the character files on, or providing a download link, or asking customers to buy the downloadable version as well.

None of those are particularly satisfactory; the CD is more complexity, the download means coming up with a way for a secure password and makes VAT more complicated, and nobody wants to buy two versions of the same game.

But our free version of Way out West (which you can get simply by signing up to our newsletter) solves those problems. Now you can have the book and downloadable files at the same time.

We used Amazon’s CreateSpace self-publishing system for Way out West. This is a print-on-demand service that means we don’t have to keep any expensive stock, or become involved in shipping.

We chose Amazon over Lulu for two main reasons. First, Amazon is the online retailing heavyweight, and by having one of our games on Amazon we might attract new customers. Second, Amazon Prime members get free shipping on a CreateSpace book, which is an added bonus.

I have to say that I found CreateSpace a bit fiddly to use. If we ever use it again I suspect it will be much easier.

With a book, though, we needed to decide an order for everything. So here’s the contents:

Unfortunately we can’t offer this book for free, as there are costs involved in producing a physical product. However, we have kept the book as cheap as possible and it is on sale for $5.99.

You can purchase Way out West on Amazon here (US) and here (UK).

Way out West on Kindle

Another advantage of using Amazon means that it’s pretty easy to create a Kindle version. Easy, but not seamless. We found we had to make a few changes to the layout to suit a Kindle, in particularly removing anything complicated (such as the three column layout for the newspaper) and the boxes for item cards.

To be honest, a Kindle version of Way out West is a bit of experiment. It’s not as easy to use as a book, and I don’t think anyone would ever be able to actually play Way out West from the Kindle version. It’s for those who really like their Kindles…

You can see Way out West Kindle Edition here (US) and here (UK).