We provide templates so that you can create your characters in the right format so that they don’t stand out too much from the “real” characters. And we will also award anyone with a free game if they create a character that we like and publish on our site. But what we haven’t done is provide advice on how to write those extra characters. Until now

For the purposes of this article, we’re going to create a couple of imaginary optional characters for an imaginary murder mystery party: Murder at the Ball. Murder at the Ball is a murder mystery set in the world of fairytales – characters include Prince Charming, Cinderella, Snow White, the Wicked Witch, Sleeping Beauty, Beauty, the Beast and other familiar characters. The setting is the grand ball, where all the plots will unfold.

We’ve realised that we need two extra characters as we have two more guests coming than originally expected.

Here are some typical types of extra characters that we find fairly easy to add:

So the first thing to do is to decide what additional characters to add. Having read through the game we’ve decided to add Fairy Tulip, an assistant to the Fairy Godmother, and Jack the Giant Killer (from Jack and the Beanstalk). We’ve decided to pick these two because we believe the Fairy Godmother already has plenty to do and Murder at the Ball has a plot all about electing a new Mayor, which involves a lot of people and we can fit Jack into. 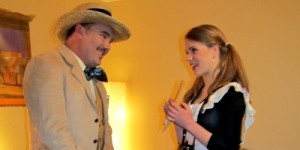 We usually start our character backgrounds with a brief summary of who the character is and why they are present in the game:

Then we explain any background information that the characters know (including links to other plots), along with what they need to achieve. So for Fairy Tulip, this would include some of the things that the Fairy Godmother is working on that she can help with. We would refer to the Fairy Godmother’s character sheet for examples – but we wouldn’t copy it word for word, but instead write it from Fairy Tulip’s perspective.

For Jack, we would look at other Mayoral candidates and use their description of how the election works in Jack’s background.

Do the same with other plots. For example, we would normally tie them into the murder plot. For example, it could be that Fairy Tulip was a close friend of the victim, and is therefore motivated to find the murderer. With Jack, on the other hand, we might decide that some of the clues that point to the murderer also point to Jack – turning him into a suspect.

Where possible we try to include conflict in our plots. So Fairy Tulip might not agree with all of the Fairy Godmother’s plans, and might actually be working to foil one or two. Similarly, Jack could be a rival to one of the other Mayoral candidates.

The goals section of our character sheets are a reminder and clarification of that character’s objectives. They shouldn’t add anything new that isn’t already covered by the background. The number of goals varies from game to game and character to character, but four goals is a good number to aim for. 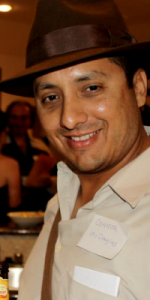 We use the Other People section of the character sheet to add useful snippets of information about other characters in the game that our new characters know. We try not to repeat the information on the cast list as that doesn’t add anything new. Instead, we prefer to add something that lets our character strike up a conversation, either with that person or someone else.

Our new characters should need no more than five or six Other People entries, so they won’t need an entry for everyone.

We find it useful to look at the Other People sections of the original characters. In many cases those entries can be copied word for word as they often reflect things that they have seen or have heard stories about – and our new characters might have seen those same things or heard those same stories.

In our example, Fairy Tulip might have an action to report to the Fairy Godmother and ask if there is anything she can to do help, while one of Jack’s actions might be to talk to Prince Charming about the glass slipper.

The easiest way to give abilities to our new characters is simply to copy some abilities from the other characters. If you’ve played one of our other games, you could also copy an ability from that game.

We normally give each character three abilities (some of our older games don’t follow this rule, however – do whatever suits the game, but three is about right).

Most characters have a guilty secret that they don’t want anyone else to know – that’s what goes in their Secret. This is usually pretty incriminating, although we don’t put the identity of the murderer in Secrets because we want the murder to be solved by using deduction rather than abilities!

Information/Clue contains a piece of information that the character knows. This relates to one of the plots, often the murder plot. We put key information here to ensure that it circulates around the game (to those that need to know) via the use of abilities.

Our new characters may need items that are both needed for their backstory and help with other plots. For example, Fairy Tulip ought to have a wand and Jack the Giant Killer might have some magic beans, a golden harp and (perhaps) and axe.

Information for the original characters

We first decide who needs to know these new characters. Where we have created an assistant or a family member then they will need to know who this new character is, but there will also be other characters who will know something about your new characters.

In our example, clearly the Fairy Godmother will need some information to introduce Fairy Tulip, and Fairy Tulip may well be known by other characters as well.

Where we’ve told one of our new characters that they have interacted previously with an original character, then it is important to tell that character of the interaction. For example, we added to one of our characters that Prince Charming had told them that he was looking for a glass slipper (see Other People, above). It’s worth telling Prince Charming that he has asked Jack the Giant Killer about the glass slipper but that Jack didn’t know where it was.

When we give our characters guilty secrets, we make sure that another character either knows their secret already, or has clues that they aren’t what they seem. For example, suppose we decide that Jack the Giant Killer is a fraud and didn’t actually climb the beanstalk and kill the giant. In this case we might give Rapunzel some additional information that she recognises that Jack is really Rumplestiltskin.

Send your characters to us!

Once you’ve written your characters and used them in your games, please send them to us! If we like them we’ll upload them to our site (after we edit them a bit) and give you a free game in return. (Note that any characters you send to us become our property and copyright of Freeform Games, and we may use them in future releases, although we will credit you as author.)