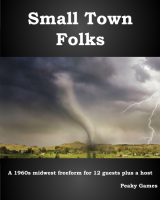 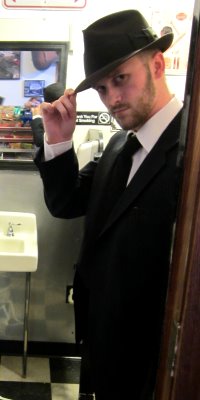 (we don't have any photos from Small Town Folks yet, so this is from one of our other games)

1962 Macy, Nebraska is a small town like any other. But when the tornado approaches, twelve people are trapped in an underground bunker. As the storm rages overhead, tensions rise, secrets spill, and long-buried rivalries erupt. If they survive the tempest, the lives of these small-town folks will never be the same again…

These are the characters in Small Town Folks:

Small Town Folks works like many of our normal murder mystery games, except that there’s no murder. All of the characters have their own goals and objectives. Like our other games, how you achieve your goals is entirely up to you.

On the evening of the game the players are given their detailed backgrounds - including dark secrets, objectives and money. When everyone has arrived the game starts in the storm cellar with the tornado raging overhead. The real fun then begins as everyone questions each other and tries to achieve their goals. Finally, the game concludes and everyone finds out how they did, and what secrets everyone else was concealing.

Small Town Folks is published by Peaky Games and assumes that you have hosted a murder mystery game before. While the instructions are fairly clear, if you haven't already played or hosted one of our murder mystery games, we recommend you do that first.