As part of this year’s Hollywood Lies update, one of the changes I have made was to the murder plot. The original murder plot involved a love affair, and that was no longer appropriate as I was making the game more kid-friendly and gender neutral.

So this is what I did.

Obviously I don’t want to say too much about it here, so the rest of this post is about how I developed the plot rather than the details of the plot.

Once I’d worked it all out, I wrote it down in bullet points. 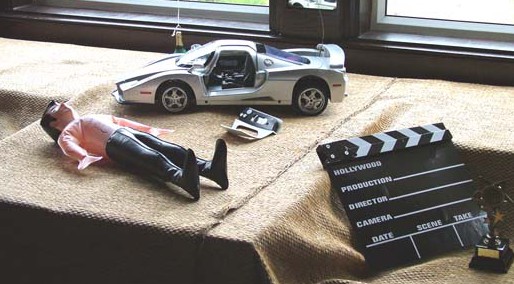 The Hollywood Lies death scene – but is it murder? (Probably.)

With the murder outline in hand, I wrote down the clues that I needed that would lead to the murderer.

I also needed some red herrings, and other suspect. Our victim, Tom Speed, was a nasty enough character that he had a number of enemies.

I used a table (along the lines of the one below) to keep track of the murderer and suspects (and to make sure that one of the suspects didn’t have too many clues pointing to them).

Then I wrote the murder plot out in full, written from the murderer’s perspective. One of the challenges I find of writing the murder plot is that if it’s too involved, then there’s no space left for the murderer to have any other background or goals. So I made it concise enough to leave space for other plots, but detailed enough that the murderer knew what they had done.

Then I worked through the other characters.

I concentrated on the ‘core’ characters first. These are the characters that are always used in the game – the ones used when you’re playing with the minimum number. The clue trail has to work with them, so I made sure that all the clues were spread amongst the core characters.

Incidentally, this is why it’s difficult playing with fewer than the minimum number. You have to be really careful who you drop, in case the character you drop has a key clue that you can’t solve the murder without.

The denouement and other handouts

With the core characters done, it was time for the denouement, or the solution to the murder mystery that’s read out by the detective at the end of the party.

I like writing denouements. I imagine Poirot making a speech in front of all the suspect, and it’s about the only space in our games for a little dramatic flair.

With the denouement finished, my next task was to write the murder plot handouts that are needed during the game. In Hollywood Lies, this consisted of a few timed handouts relating to new information provided by forensics. 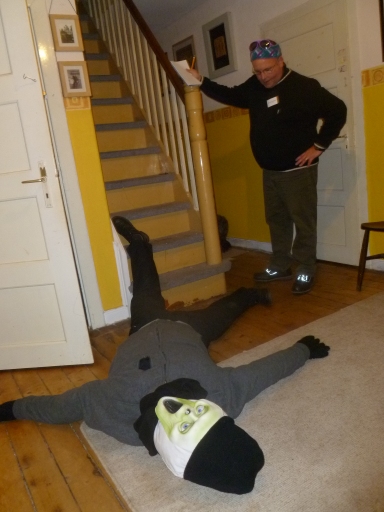 Another death scene – this time from Snow Business

With the core characters, the denouement and the handouts finished, I wrote up the remaining characters.

For the remaining characters, I repeated the clues that I had already used for the core characters. The reason for this is that with more characters in the game, it’s possible for an individual clue to be overlooked. Multiple copies of that clue makes it less likely that that will happen.

Murder all wrapped up

That’s how I updated the murder plot for Hollywood Lies, and it’s pretty much how I write any murder plot, whether I’m starting from a clean sheet or adapting an old game.