We’ve just tweaked Pirate Island so that it now works with up to 32 pirates. I’m going to explain the how and the why of doing that.

Pirate Island had been bugging me for a while – because it’s actually a bit fiddly to prepare. 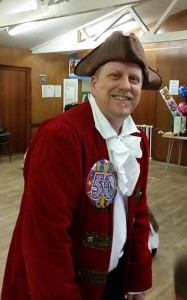 Scout Master Richard running Pirate Island – and on his 50th birthday as well!

Pirate Island is a team game, where the pirates are all members of a ship’s crew, trying to be the best pirate crew. To be the best, they have to enter contests, track down treasures and trade items with each other.

Everyone in Pirate Island plays a pirate. Either a Captain, a Gunner, or a Crewmate. And in keeping with our other murder mystery games, each of them has a character sheet.

A full game of 24 pirates has eight ships, each with three crew. However, with only 23 pirates, then we use seven ships with three pirates, and one ship that has only two pirates. That two-pirate ship is functionally the same as the one it replaced, except that it has a different name and only a Captain and a Gunner. By having four such ships (with two and three pirate versions) Pirate Island is fully flexible for 6-24 players.

But it’s a bit fiddly to prepare. Unless you are absolutely certain of your numbers, you have to print out all the ships just in case someone drops at the last minute. Or you get an extra unexpected pirate. Pirates can be so unpredictable!

When we came to Trick or Treat / Monster Mash, we simplified all this by creating team envelopes that didn’t require specialised roles. That way a team can be two or three (or more!) monsters – and there’s no extra printing required.

So one of the things that I wanted to do, given time, was to do the same with Pirate Island and tweak it to make it simpler to print and run, along the lines of Trick or Treat.

That’s not what happened, though.

What happened next – the Cub Scouts

Instead, I was contacted by a friend, Richard Salmon, who had purchased Pirate Island and wanted to run it for his Cub Scout group (the 1st Nork St Paul’s Scout Group). The problem was that he had over 30 cubs coming, and that would mean an awful lot of the generic extra Crewmate character. We had written the additional Crewmate to allow for one or two extra pirates – not nine!

Could I sort something out?

So rather than my original plan, I made the more-or-less identical ships more unique. The main change I made involved the pirate quests.

In Pirate Island, each ship has a map to a 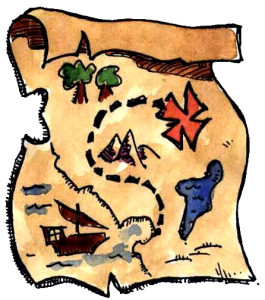 pirate treasure (such as Blackbeard’s treasure, or the wreck of a treasure ship). To find the treasure means solving three puzzles, and the answers are scattered amongst the pirates – so they have to team up to solve them.

The more-or-less identical ships had the same treasure map, so I made them all unique. Instead of writing brand new clues, I simply re-used existing clues from the existing quests. (I had to choose the clues carefully to make sure that I didn’t accidentally give them all to one ship.)

Other changes involved tweaking item cards a little and checking that I hadn’t messed the game up anywhere else.

So how did the new, expanded game go? I asked Richard for feedback and was told that:

“It went very well – they all seemed to have a good time.

“Took a bit of time to get started and the motto and performance contests were less popular. The quests all seemed to work out and there was a flurry of trading of items at the end. The winning team got nearly fifty doubloons, but some only collected a dozen or so (mainly because they didn’t do the contests).

“With cubs if something not engaging them; they start chasing one another about and generally messing; we didn’t have any of that for the hour they were playing; so that means they were really quite into it.”

Here are some photos from the scout group’s Facebook page. And here.

So while we’ve adjusted Pirate Island, we’ve taken it in a different direction than the one I had originally expected. I’m very happy with the way this has turned out, and maybe now that Pirate Island is bigger more groups will think about giving it a try.

And it really works for cub scout groups!