Some of our games include a simple combat system that allows characters to try and kill each other. We use rock-paper-scissors to decide who wins. You can read our combat rules on our standard rules page here.

Some customers, however, have decided to create their own combat systems…

Please note - we haven’t tried these, so please treat them with a degree of caution!

Charin Singh sent in these modifications for games with a modern setting and gun combat.

The suggestion is that if some guns have silencers and others don't, you can give the silencers an advantage by the shooter doing S-P-S with the host, rather than with the victim.

Then, if the shooter wins, the host tells the victim they've been shot and to fall over, but they (and the other players) don't know who fired the shot.

You'd have to ensure that the shooter did actually have a clear line-of-sight on the victim, and perhaps at extreme range you'd want to make it more difficult to hit, but it seems a fairly simple and useful extension.

Using a console for combat

Georgeh reports: We are playing A Dead Man’s Chest on Friday and I want a fun and easy way to fight but not by playing paper-rock-scissors (as I have used this on other games).

I have found a cheap Wii game, Pirates Hunt for Black Beard's Booty, on Amazon. This has a mini pirate fighting game between two people using the Wii wands as swords. I will set this up ready all night for people to duel when required.

(The only difficulty with that is if it turns out that someone is really good at the game – you may need to come up with a handicap for some characters.)

Getting imaginative with the combat rules

Lanalehr writes: We just played Davy Jones' Locker last night and it was a huge success!

Part of the reason was the 'fight room', which we also called the ballroom. I turned the bigger room in our house (not really that big really) into a 'ballroom' for the ship. My friend brought a small sound system (two mikes and an an amp) and connected it to a laptop. The fight rules were the regular rules but to fight the attacker had to choose one of the four choices:

This added a really fun element to the party, and people are still raving about the fight portion of the game.

To theme it, I started with doing songs around reggae tunes and jigs and reels to keep in the 1700 pirate themes, but after a while people didn't care – they were going for the old 80s favourites!

I would say, though, that if you want to do any of these ideas, you may want to appoint a different moderator than the host. There were so many fights lined up that I had to stay and host that after a while. Meanwhile, though, people were still in character and working their secrets.

Yet another idea for a different combat system

choc_tpot suggested another variant on our fighting rules:
First of all I wanted to drop the range of the weapons and just have a general rule of, long range weapons (guns) can be used on targets that are in sight. I'll explain short range weapons later.

If a shooter wants to attack a target, I wanted to establish a way that this could be done more covertly, so the victim may not be able to identify his/her attacker. So the shooter will have two options…

For short range weapons (knives and so forth) the killer will again play RPS with the host. If they win then the killer must then touch the target (bump into them, touch their shoulder, fake a stabbing, as obvious or inconspicuous as they like) after which the host will tell the target they've been stabbed, clubbed, garrotted etc.

For brawling, the attacker will announce their intentions to the target and play RPS with them as normal, but to simulate the exchange of blows they will play best of three.

Alternative combat in Way out West

kittydreamz suggests: For combat in Way out West we had two options. The "gentleman's way" was to call an opponent out and duel face to face. They could either play a full-body version of roshambo (rock-paper-scissors) called bear-man-gun, or use the children's rubber band guns we bought for the party. Both were dramatic and silly and fun. For sharpshooters we still said they inflict injury on a tie. We initially were going to do blackjack or dice as an option for "try something unusual" but streamlining to simple was just easier.

Cowards were allowed to snipe or sneak attack by playing bear man-gun-with one of the bartenders who then told the victim they'd been hit or dodged a bullet.

I plan on hosting A Will to Murder in the next few weeks, however, some of my cast is either a bit out of shape or a little older and should not really be getting up and down from the floor when they are rendered unconscious or dead. Therefore, I have created these sticky labels so that when they do get into that situation, they can still sit in a chair or remain standing (and the other characters will be able to see their status from the sticker and realize why they are not responding or have their eyes closed, lol!

PS – I guess this could be helpful in larger groups, too when multiple people might die and still want to enjoy the party and its food!

Melissa reports the following for A Dead Man’s Chest: For our "duels," we let the players pose with swords (my husband collects swords) for some cool pictures, but then the duel is settled by the roll of the dice. Instead of rock/paper/scissors, we try to find something that fits in the theme of the game. Since they play the dice game in the pirate movies, we use dice for this game.

Court in the Act

For Court in the Act, Melissa reports: For our duels, instead of rock/paper/scissors, we try to find something that fits into the theme of the game. We allowed the players to pose with swords for pictures (if that was their character's weapon), but then decided the outcome with chess pieces. A chess board was set as part of the venue. The bottoms of the chess pieces had tiny pieces of post-it notes attached to the bottom, which were numbered. The dueling parties would step up to opposite sides of the board and when told to do so would each lift a piece of their choice. Higher number won the duel. 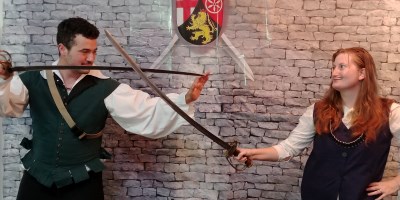 Curse of the Pharaoh

Melissa (again!) told us: After researching games from Egypt, we chose to use Mancala to determine the outcome of duels. We had a board set up in play as decoration, then had a bag of additional Mancala stones with assigned point values. Players drew three stones (white=1, green=2, blue=3) and the higher number won.