In our experience, a bit of attention to the venue where you are hosting your party can make a big difference to how it plays out.

These murder mystery venue tips have been sent to us by our customers: 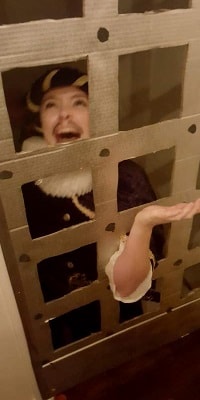 This murder mystery party venue tip was sent to us by Justen: My biggest tip is on room layout! Essentially, aim for a space with as many separate rooms and nooks and crannies as possible. The more places for people to be alone when they chat, the more likely they'll scheme (or eavesdrop). Whenever I've seen guests piled up in one room, it's led to fewer conversations, for fear of being overheard.

To add to this, seating can help immensely. Spread out your seating into very small groups. Two chairs in one corner, three chairs in another room, two chairs somewhere else. Give people a chance to sit and scheme with one another without having to be adjacent to a large group. It'll get the tongues a-wagging!

Same goes for food. Spread it out amongst the area and don't put any chairs near the food tables; you don't want someone camping by the food table all night. Make people have to walk around and mingle as much as possible with your layout. Give them reasons to have to move to other rooms and meet other guests, or "accidentally" run into other guests so as not to raise suspicions.

Room layout has been the single most helpful thing for me and my friends when it comes to a successful murder mystery.

Jollirog also sent in a murder mystery party venue tip: Two things that have helped have been:

So long as there's seating and a little light and free access, folk seem to make their way out there. (In recent years, the firepit has also become part of the scenery!)

We’d just like to add that please be careful when using candles! There are many LED candle-light alternatives available now that are much safer!

Lilbug writes: We purchase small items that match the theme of our murder mystery and use them to decorate the food table. For our wild west themed night we had a covered wagon, some cowboy boots, plastic utensils were placed in a western styled pencil holder, and even a bottle opener that had a cowboy on it.

At the end of the night while I'm handing out awards for costumes, best actor/actress, most convincing character portrayal, etc…, I have someone (last time it was my daughter in law) sneak around and gather up all the little trinkets we've 'decorated' with and place them into an inexpensive gift bag.

As my guests are leaving I just hand them a bag and thank them for coming. It's a physical reminder of the party and my last opportunity to let my friends know how much I enjoyed sharing the evening with them.

It's pretty easy to find reasonably priced 'decorates' that can double as keepsakes after the party, as long as you start out with the end result in mind.

Using the television to create atmosphere

We normally recommend that you hide the television (and other modern equipment) when running a historical game, but choc_tpot had a different idea:

As we are having our party on New Year's Eve, we want the TV available so we can all watch Big Ben at midnight, but as we are playing Who Shot the Sheriff, it obviously doesn't fit the theme.

So I've downloaded a three hour fireplace video from Youtube and that way it makes the TV part of the decorations.

I'm sure there are probably other suitable videos for other themes, for instance, I saw a video of a sunset over the sea which would be ideal for Lei'd to Rest.

You can send us your own murder mystery party venue tips via our contact form, or via our Facebook page, or by posting in the Facebook Comments below.