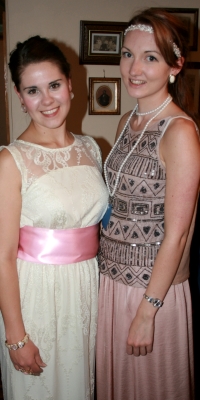 I recently played in UK Freeform’s annual weekend game. Last year it was Cafe Casablanca (Mo played and I helped run it). The year before we both played in The King’s Musketeers. And this year it was Lullaby of Broadway: Into the Woods.

As you might guess by the title, Lullaby of Broadway: Into the Woods was based on Broadway musicals – lots of them!

I played two characters – the baker (from Into the Woods), and an assistant to the King of France (a generic “flunky” character and good friend of Cinderella’s Prince Charming).

I’ve mentioned playing more than one character in passing at least twice: once when talking about creating a crowd and also when talking about bit parts. So I thought this would be a good opportunity to talk about playing two characters in a bit more detail.

Playing more than one character at once

About 20% of the players at Lullaby of Broadway: Into the Woods were playing two (or even three) characters.

The reason for this is that the game was undersubscribed, and rather than cut out ten or so characters and rewrite the game, the authors asked if any of the players would be prepared to play more than one character.

And because I thought that sounded like fun, I said yes.

In playing two characters, I had no time to be bored. Both of my characters had plenty to do – and doubling up just made me busier. (This is a good thing – I like to be busy in my games!)

In terms of how it worked, I only played one character at a time. Other players could tell who I was playing by my namebadge. If they needed my other character, they just asked me.

One consequence of that was that I didn’t achieve all my goals – there were just too many for me to do in the time. But I had a go at my main goals – and I had a wonderful time doing it.

And as far as I can tell, so did the other players who were running two characters. In fact, from asking around, most of them enjoyed the experience and would do it again.

So given that playing two characters is a lot of fun, how do you make it happen in a Freeform Games murder mystery? I’ve put some thought into that. 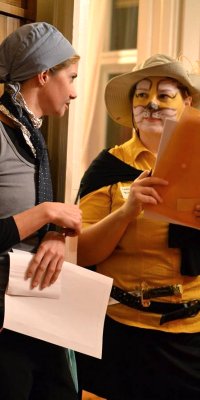 Superheroes plotting in A Heroic Death

These are my tips for giving two characters to a player.

Try it for yourself!

So next time you don’t quite have enough players for all the characters in one of our games, maybe you can persuade one of your players to play two characters.