Some of our most popular games have been translated into German, by native German speakers, to allow hosts and guests to organize murder mystery parties entirely in German.

Most of our games in German are available from our partner in Germany. But there are a few that you can only find on this page! They are all available at the same prices as the English versions of the games. You can buy them from this page, via PayPal (where you can also use a credit/debit card). Each has a free introductory pdf file that you can download – also in German, of course – with more details about the game.

And here's another article in German by Die Besten Familienspiele, based around some great detailed and honest feedback from a customer who had run Way out West (Deutsch). This is definitely worth reading, if you're thinking of hosting one of our games.

Games that you can get from our German partner

Just click to be taken to Simone's site, where you can find out more about each game and make your purchase.

Eiskalte Geschäfte
(based on Snow Business)

Tod in Venedig
(based on Death in Venice)

Tödliches Klassentreffen
(based on Reunion with Death)

Mord in der Flüsterkneipe
(based on A Speakeasy Murder)

Eine Orientnacht
(based on Arabian Nights)

Ein heldenhafter Tod
(based on A Heroic Death)

Des toten Kerls Kiste
(based on A Dead Man's Chest)

Letzter Wille Mord
(based on A Will to Murder)

Der Fluch des Pharao
(based on Curse of the Pharaoh)

Tod auf dem Gambia
(based on Death on the Gambia)

Die Pirateninsel
(based on Pirate Island)

Games that you can get here

IMPORTANT NOTE: you'll see below that these games are priced in Euro. If you're not in the Eurozone, that's OK – PayPal will convert the cost to your own currency for you. 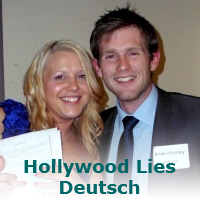 Hollywood Lies Deutsch, for 16–22 guests plus one or two hosts. Here's the free introductory pdf file.

(IMPORTANT NOTE: the German version of Hollywood Lies does not match with the English version – it doesn't include the most recent set of revisions.)

Click the buttons below to buy Hollywood Lies Deutsch for €29.99 via Paypal, or with a debit or credit card:

The Hollywood Lies Expansion Pack has also been translated:

Click the buttons below to buy the Hollywood Lies Deutsch Expansion Pack for €11.99 via Paypal, or with a debit or credit card:

Click the buttons below to buy Hollywood Lies Deutsch Expanded for €35.99 via Paypal, or with a debit or credit card:

We also have two free extra characters for Hollywood Lies Deutsch available in German: Ginger Roberts and Gwen Cortinelli. They're included in the game download. Thank you to Uschi Koch for translating them, and for updating the main game files! 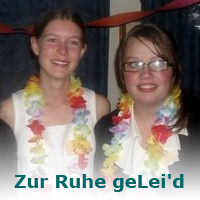 Lei'd to Rest in German

Click the buttons below to buy Zur Ruhe geLei'd for €23.99 via Paypal, or with a debit or credit card: 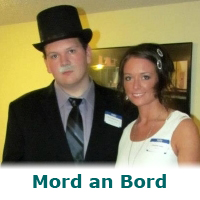 Murder at Sea in German

Mord an Bord, for 17–33 guests plus one or two hosts. Here's the free introductory pdf file.

Click the buttons below to buy Mord an Bord for €35.99 via Paypal, or with a debit or credit card:

We also have nine free extra characters for Mord an Bord available in German. They're included in the game download. Thank you to Lis Stirn for translating them, as well as the main game files! And thanks also to Peter Duenki, for translating an earlier version of the game.