When I’m not making murder mystery games for Freeform Games, one of the other things I do is… make other kinds of games. (I may have a bit of a games problem. Although if you acknowledge it, it isn’t a problem, isn’t that right?)

So just lately I’ve been thinking about card games, particularly small ones that can be played in a family context – not too complex, but with enough interest and depth to make people want to try them again (and again). I am the first to admit that I have a lot to learn, and the games I’ve designed are not yet as good as I’d like them to be: but I have just had one published, so I thought you might like to take a look. Especially as it’s free!

Yes, the game’s called Shape Up! and you can download it for free from the publisher’s site, Good Little Games. Just print out the file, cut up the cards, and away you go. There are also several other good games on the site, all also free!

Here’s an example card from the game: 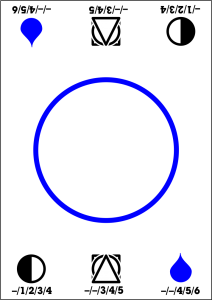 which is basically about assembling these different-symbolled cards in different combinations to score more points than your opponent.

Give it a go if you think it sounds like your sort of thing! – and Steve and I would love to hear what you make of it.