Welcome to the latest issue of our occasional newsletter! In this issue we have a brand new game for you:

Our latest murder mystery party game is set on a glamorous railway train travelling through Europe. It's for 7–11 guests and a host, and the guests can be any mix of genders. Murder on the Istanbul Express is a straightforward game with no combat and no extra rules, so it's a great choice for people who are new to our murder mysteries! 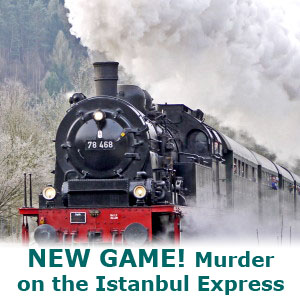 The luxurious Istanbul Express takes three days to travel between Istanbul, Turkey and Paris, France. The train line is lavishly opulent and has a glowing reputation. Tonight, some of Europe's most notable citizens and travelers (and some who are not so notable) are journeying in style through the European countryside.

Two days ago (June 29, 1914), just before the train left Istanbul, newspapers announced that Archduke Franz Ferdinand of Austria, heir to the throne of Austria-Hungary, had been assassinated in neighboring Bosnia. Everyone is now on edge – this could be the start of a great war.

A further trouble is the discovery of a dead body in the kitchen car this evening. Selda Zaim, the maid of Turkish merchant Esra Hoca, appears to have been bludgeoned over the head with a cooking pot.

It is now midnight and only a few hours until the Istanbul Express arrives in Paris and the proper authorities can investigate the crime. But until then, there are many mysteries to unfold…

Murder on the Istanbul Express is available from our website for just US$29.99. You can click here to find out all about it!

These are the characters in Murder on the Istanbul Express:

All the characters are of neutral gender, so they can be played by any mix of guests as required.

We've had this great review of Way out West, from Michaela:

THANK YOU SO MUCH FOR YOUR GAME!!!

I was a bit worried about it because nobody (from our friends) had ever played this game before and we didn't know what to expect. I'm very extra with everything and I love planning events so I knew it will be okay from my side of organiser (the bartender) and from my catering. I wasn't sure to what degree are some of my friends able to play their persona because not everyone from the group knew each other and I didn't play any roleplay game with most of them.

My boyfriend knows how extra I'm with all this and he knew I'll have a nice wild west dress so he bought some revolver and many other nice details for his character (Clem). I was expecting that most of the people from our group will have a cowboy hat if anything at all because we are group of young people and I know they are not spending much money on unnecessary things… but boy, was I wrong! I almost cried when everyone came dressed up.

At the beginning I wanted them to stand up and just say a bit about themselves so everyone can remember who is who (although I made a revealing picture for every day as shown below). Again, I was expecting they will just say "I'm Mel Easton and I represent…" but my boyfriend's twin who was playing Elijah came first and started preaching super loudly :D After this, everyone made a great entrance because this broke the ice. 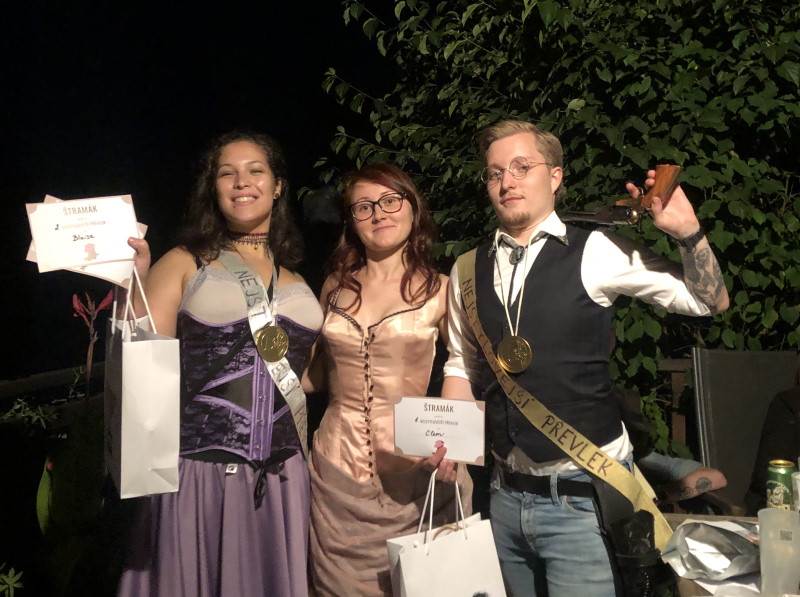 The game went great as well and everyone was asking when we are playing again and that they want to play the biggest game you've got and that they are owing me a game where I'm a playing character as well and so on… whole evening turned much better than I expected and I think we will be remembering this night forever!:)

I also made some welcome drinks and gave away funny presents after the game.

Thank you for an absolutely great time, we are looking forward to playing next game from you!

Possible tips for other people: I made a Facebook event which was used as a platform to communicate about the game and also a reminder so everyone was counting with it (that was my biggest fear... that someone won't come.)

I made public a Cactus Gulch Gazette and Rules of the game + I sent a questionnaire there which helped me to match the people with characters (they answered me questions about the characteristic etc which they wanted to play, it helped a lot!)... then 3 weeks before the game I sent everyone invitation with the name of their character and 2 weeks before they got the full character sheet with everything else in the same folder so it was easy for them.

17 days before the game started, I put a picture with cowboy hats to that page and then I revealed one person each day. It was fun and also made start of the game easier because most of them knew who is playing the character they want to speak with.

I've also prepared a photobooth for us and a welcome drink with their faces so they knew where to sit. And I made a wanted poster for everyone so as they were walking around the house, they could find their face and it made the atmosphere better. It was fun!:) 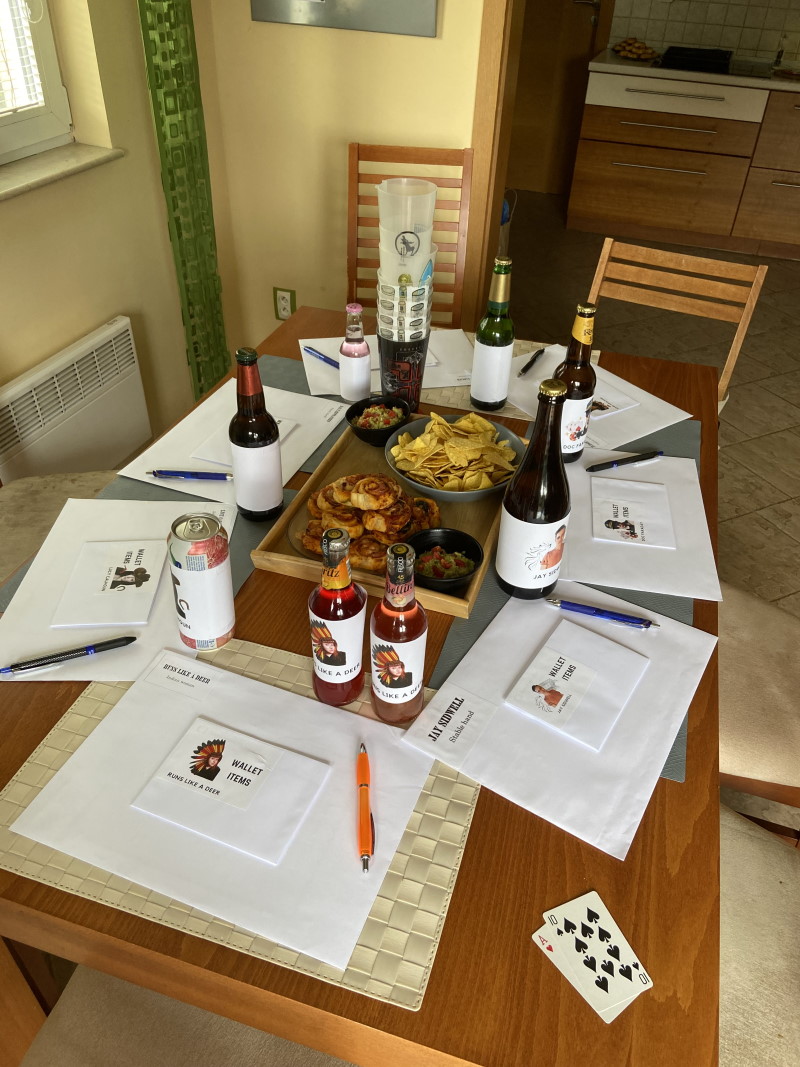