Welcome to the latest issue of our occasional newsletter! In this issue we have a brand new game for you:

Welcome to Las Vegas, where, as the saying goes, “What happens in Vegas, stays in Vegas.” 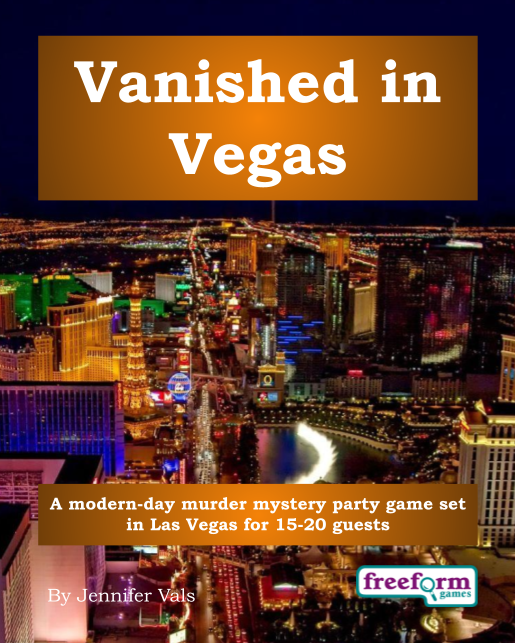 The Sapphire Hotel and Casino hosts Vegas’ hottest ticket – Jaspar the Great’s Magic Show. Jaspar never disappoints, and his show climaxes with his famous vanishing act, where he disappears into a case and reappears wearing an extravagant costume unique for each show!

Tonight, however, when his assistant unveiled the case, Jaspar did not reappear – the case was empty! His assistant shrieked and ran off the stage in tears – but was that all part of the act? What happened to Jaspar?

It is now an hour later, and Jaspar has yet to make an appearance. Undercover FBI agent, Declan Grant, is holding everyone in the casino for questioning. Everyone may mingle but cannot leave until the mystery of Jaspar’s disappearance has been solved.

The pandemonium is just beginning… a magician, a bag of money, and a pet chihuahua have all vanished. Who is responsible? A ghost and a Bengal tiger aren’t the only suspicious culprits. Con artists, mafia thugs, blackmailers, and thieves will all come into play.

Get ready for a one-of-a-kind, spectacular evening at The Sapphire on the Strip in Vanished in Vegas!

Vanished in Vegas is a new mystery from Jennifer Vals, who wrote the amazing Bludgeoned on Broadway! It’s for 15-20 guests plus a host, and it costs US$ 39.99.

These are the characters in Vanished in Vegas:

Not just for online any more: Reunion with Death, and Death in Venice

When the COVID-19 pandemic hit, and lockdowns made parties impossible, we switched our focus to develop two new murder mystery games that could be played online, via Zoom or similar video chat.

Now that things are mostly back to normal, we’ve rewritten these two games so that they work for playing face-to-face, in the regular kind of way. You can still play them online if you want to, of course – but they’re now designed to work just fine in a room full of people.

One other unusual feature about Reunion with Death, and Death in Venice – the host can play too! Yes, unlike most of our other games – the host of the party can take one of the character roles, and try to solve the murder mystery along with everyone else. We’ve written the instructions for the game in such a way that the host can organize the whole thing without needing to see any of the game secrets.

Reunion with Death (for 6–9 people, including the host)

A 15-year high-school reunion, in smallish-town America. Former students are gathering in the town's main hotel, ahead of the big party tonight. But one of them, former prom queen Mikolette Lukanis, has been found murdered!

Everyone is locked in together in the hotel ballroom where the gala was to have taken place, pending a full police investigation. High-school rivalries will re-emerge, old grudges and secrets will surface: along with a heady mix of present-day envy, betrayal, and lust.

Get out your glad rags, consult your old high-school yearbook, head for the complementary bar, and join the alumni of Holborrow High as they prepare for their Reunion with Death!

Reunion with Death also has a special Christmas version!

Death in Venice (for 5–9 people, including the host)

Last night at the glamorous Venice Film Festival, controversial director Clay McFarland picked up the prestigious Golden Lion award for this season's hit movie Never Look Back. But this morning, he was found lying in front of St Mark's Cathedral – hacked to death with a meat cleaver.

The stars of the movie and some of their guests supposedly spent the night sleeping off the effects of the post-awards party, on the Casanova, their luxury yacht moored in the marina – but it seems that someone was up to no good. Traces of McFarland's blood found on the Casanova's dinghy mean that police are confident that the culprit is one of those who are now confined aboard the yacht.

As cathedral bells toll out across the ancient city, on board the Casanova a frothy ferment of vineyards, memoirs, gossip, jealousy, and movie-set punch-ups will come to the boil.

Charge your glasses, put on your designer sunglasses, and join the cast and crew of Never Look Back as they try to solve the mystery of Death in Venice!

New versions of Curse of the Pharaoh, and Happy Birthday RJ!

These are two of our earliest games – they date from 2002 and 2003 respectively – and it was about time we gave them the polish-up they deserved. They’re now in our new format, with individual booklets for each character – and we’ve made a host of other improvements and clarifications along the way.

If you’ve purchased one of these games in the past, you’re entitled to download the new version, of course – just get in touch with us to get a fresh download password.

If you haven’t tried either of them yet, then now’s the ideal time!

The Valley of the Kings, Luxor, Egypt. 23 April 1894. The excavation season will soon be over, as the baking sun makes digging unbearable, but the Oxford University archaeologists lead by Sir William Saville have made a startling discovery. Tonight, the team and their guests prepare to enjoy a slap-up dinner to celebrate the uncovering of the tomb of a previously unknown XVIth Dynasty pharaoh. But while the archaeologists make merry, dark clouds gather, internal tensions among the group burst to the surface and one of the local diggers is brutally murdered…

It is 1984 and the height of the oil boom. Harrington Oil is the most successful oil company in the state of Texas. Tonight is a lavish birthday party for R.J. Harrington held at his parents' ranch – SouthSpoon. What could possibly spoil such a joyous occasion?

We are on Etsy and Itch

We wanted to try and see if we could find some new audiences for our games, other than those who come to the site via a Google search (which is most of you). So we’ve opened storefronts on Etsy and itch.io – check them out!

You won’t see any different games there from what we have on our own website – or different prices. This is really aimed at people who wouldn’t usually come to our website. It’s early days yet, but we are making a few sales, so hopefully it will help to introduce some new people to the delights of murder mystery parties!