Note – this is a thought experiment for experienced hosts and players. I’ve yet to try this out – so I don’t know if it works.

There’s a style of freeform/larp known as a “horde” game. These normally involve six to eight “core” characters and typically dozens of smaller roles. The players playing the fixed characters stay with those characters for the whole game, while the other players take on the other roles, usually playing them for a much shorter period of time. It’s not unusual for a “horde” player to get through a dozen characters. 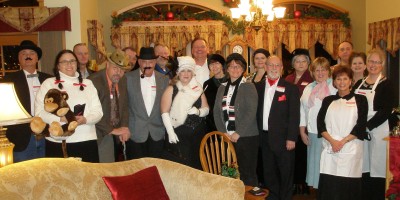 A crowd of players

A good example of a horde game is Victoria Junction: All Change Please! This was written at Peaky in 2009 and the six core characters consist of the staff of a railway station in Victorian Derbyshire. They have to cope with guests trapped in the hotel, missing travellers, troublesome orientals, a military train, and even a royal visit.

So is it possible to use the horde idea in one of our murder mysteries? I think it might be.

Let’s imagine that you’re running Murder at Sea and you have 22 guests. Normally you would use the first 22 characters, leaving 11 left unplayed. Murder at Sea works perfectly well with 22, and you should have a great time with it.

But if you’ve got some players who feel up to the challenge, you could create a horde (and I think I prefer the term “crowd”) instead. So cast the core 17 players as usual, and let the remaining five players play the other 16 characters. This is how I’d do it.

If you wanted to, you could give all the ship’s crew characters to one or two players, which might help with costuming.

When starting the game, I’d introduce those playing the crowd and explain who was going to be playing which character so that the other players know who to talk to. (A cast list might also be a good idea.)

As someone playing the crowd, here’s how I would do it:

We have a “no deaths before a certain point in the game” rule to make sure that everyone has a satisfying game. For crowd characters, I might be tempted to remove that rule and let them be killed earlier than normal. After all, a crowd player has other characters they can then play, so being killed is much less of a problem.

The key to making the crowd a success is having players who are prepared to step into the role and try it out. I would only try it with players who have already played a couple of our games – I wouldn’t try it with newcomers.

Playing the crowd might also be a useful role for players who have played the murder mystery previously but still want to be involved.

Is a crowd better than a horde?

One of the dangers of a horde game is that they are very frantic. That’s partly because the characters in the horde are minimal – there really isn’t much to them. The sometimes consist of little more than a paragraph, and the expectation is that you will normally play them once and then move on to another.

Using unplayed characters may overcome that limitation, as each crowd character has as much information as any of the core characters.

But as I’ve said above, I’ve not tried this out. So if you do give it a go, please let us know in the comments or on our Facebook page. (And I promise that if I give it a try, I’ll report back here.)