Here’s the third in our occasional series of author profiles. This time it’s Jessica Andrews – author of our 1930s murder mystery Death on the Rocks. 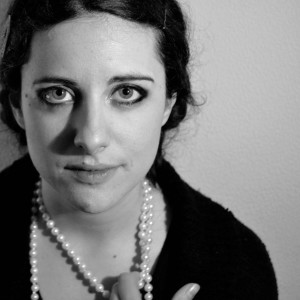 Jessica is a freelance history book editor from south east London. She‚ adores a good mystery as much as a good party, and ever since she discovered that the two could be combined, she was sold. She has been forcing her friends to play murder mystery games with her since the age of twelve, and she is not averse to donning a false moustache when the need arises.

Her love of history makes her inclined to write murder mysteries set in the past, and her particular obsession with the Golden Age of Detective Fiction of the 1930s is what led to the creation of Death on the Rocks.

Jessica wanted to create a game inspired by Agatha Christie, her favourite detective fiction writer, and her game was particularly inspired by the spooky, claustrophobic atmosphere of And Then There Were None, where the characters are also stranded on a small island off the coast of England, unable to escape when murder strikes. 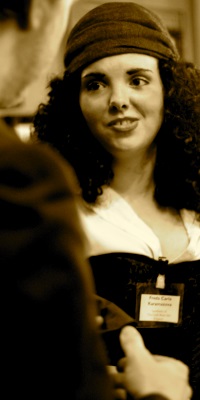 Playing Death on the Rocks

She decided the 1930s was the perfect time period for her mystery, as pre-war innocence and glamour was fast becoming complicated by shifting political currents and the fear of impending war. She was also interested in recreating the poisonous, gossipy atmosphere of small village life, where a hotbed of secret passions and scandals might exist behind the picture perfect cottage doors.

In pre-war days, it would not have been uncommon for glamorous nobility in a big mansion house to necessarily co-exist with those poorer folk working in the village, and this gave her the chance to explore a wide range of colourful characters.

Jessica really enjoyed writing her game, but couldn’t have done it without the patience and encouragement of her editor, Mo.