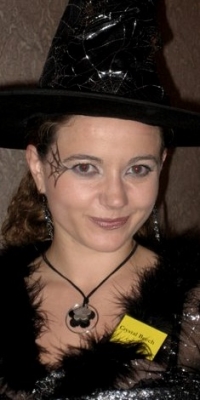 Our other Halloween game is Trick or Treat, which is very different. Trick or Treat is more of a traditional party game – there are no murders. All the players are grouped into teams (monster gangs) and have various spooky-themed challenges: there’s a treasure hunt, a pin-the-wart-on-the-witch contest, a competition to create the best scarecrow, and more. Teams can also create potions with strange effects – such as turning someone into a frog.

In order to succeed, the monster gangs must trade information and items with each other to win. Prizes for the contests can be either treats (we used sweets when we first tested the game) or tricks (which are random, and may be good news or bad).

Trick or Treat takes about 30 minutes to play (and so with briefing and handing out prizes allow for about an hour) which makes it ideal as part of a larger Halloween party.

We’ve written Trick or Treat so that it can be played by children as young as about eight (or even younger if they have a bit of adult help), but it’s suitable for all ages. Certainly when we first tested it we played it with adults.

So celebrate Halloween this year with our Halloween Bundle.