We provide safe, simple rules in our games, but sometimes it’s fun to make those rules more closely align to the real world. Here are some examples. 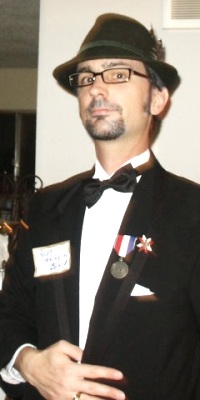 These first two are from Denise Knebel in the USA.

The secret cupboard. One of our games (I’m not going to say which) has a secret cupboard which is normally managed by the host. Here’s what Denise did instead:

I cleared out a drawer in my dresser for the players to use. I retyped the cards and on the secret cupboard ones, I wrote where to find the cupboard. It worked out well and because it was in an open place, those who had access to it had to be secretive about when they were using it.

Also, it was fun to watch when someone who didn’t know about it when they were spying on someone see them open it. At one point, the murder weapon made it into the secret cupboard! For what purpose, I don’t know but the guests had fun with it!

One of the delights in using real-world locations for things like secret cupboards is that you don’t know who else will stumble upon the secret cupboard. (That’s very unlikely to happen with a virtual location managed by the host.) But that’s all part of the fun!

Poison: Several of our games include poison. Here’s Denise again:

Since I knew all my guests were drinkers, I bought some sample-size liquors. I tied a note to it with the card information on how to use it. (Obviously to add some in a drink and hand it to the person). My group had fun with that, and it was funny to watch when someone took a drink and made a face. Afterwards, I would show them the “you’ve been poisoned” card.

(Note – here in the UK we call the sample-size liquor bottles “miniatures”.)

Obviously you wouldn’t want to do this with children or teetotallers or drivers present in your game!

I’d still allow someone to prevent pickpocketing with a “Not so fast” ability, but forcing the pickpocket to place a sticker onto their target means they may be spotted by another player. What happens then is up to them, of course.