Last year I talked about how Mo and I attended The King’s Musketeers, a weekend long freeform. This year’s weekend game was Cafe Casablanca, and while Mo played Philip Marlowe, I was one of the six “directors” (ie, a host).

Cafe Casablanca is based on Hollywood thrillers and wartime dramas of the ‘30s and ‘40s – particularly those starring Humprey Bogart such as Casablanca, The Maltese Falcon and The Big Sleep.

Cafe Casablanca needed six directors – and we were busy for the entire game.

But that’s not surprising – we had 74 players to manage!

Cafe Casablanca took an entire weekend to play – from Friday evening through to Sunday lunch. I’ve worked out that we generated about 1300 hours of person-hours of entertainment!

I was the “harbour director” and responsible for overseeing all the mischief being done in the harbour. That’s another difference with our games – Cafe Casablanca had very definite locations, from the harbour, to the police headquarters, the Gestapo office, Rick’s Bar and the casbah.

The harbour turned out to be quite an exciting place – I was never bored. I oversaw art robberies, sabotage, salvage operations (there were all sorts of things hiding in the harbour), shark attacks, and even a raid on a battleship! 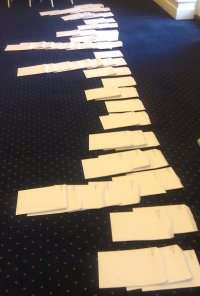 It took us hours to complete all the character envelopes for this game – but that’s not surprising given that they contained:

It was interesting to see how things have developed over the last few years. Cafe Casablanca was originally written over 20 years ago, and I’d do some things differently these days. For example, it wasn’t particularly easy to prepare. We provide a guide for preparing character envelopes in our instructions, but there was no such thing for Cafe Casablanca – there were various documents here and there, but no master.

But then I doubt Cafe Casablanca was ever written with the intention of being regularly re-run, so making that sort of thing easy probably wasn’t high on their agenda. We make our games as easy to prepare as we can because we hope they are going to be played many times!

Anyway, next year’s weekend long freeform is Lullaby of Broadway, which is inspired by Broadway musicals. And I’m going to be playing again.

2 thoughts on “Cafe Casablanca from the GM’s perspective”