In some murder mystery party games you are instructed not to lie about the details in your background. This is because to solve the murder everyone needs all the clues – but unfortunately my experience is that some people can’t just help themselves, and they don’t always tell the truth.

We, on the other hand, are absolutely fine with people lying and fibbing in a Freeform Games murder mystery party. We tell our players up front what awful deeds their characters have committed and we don’t expect them to tell the complete truth in front of the other players.

Of course we do realize that if everyone lied all the time, that would cause problems for other people trying to fulfill their goals. That’s why we include in the game Information/Clues and Secrets. These can’t be lied about, because they’re printed. If another player uses an Ability to make you reveal your Information/Clue or Secret, then you must do so. Then the other player can see written down in black and white something that you might otherwise have wanted to lie about. 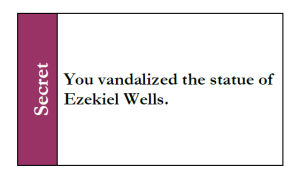 The other balancing mechanism we use is that each player has incentives to be honest and open with at least some of the other players, if they’re to try and get their own goals achieved. So in general, you’ll tell the truth to your friends and allies, but might be dishonest to your enemies. Then by making connections, third-party characters will be able to piece the clues together.

Note that there’s a difference between your character telling a lie (which is fine) and you as a player lying (which absolutely isn’t). So for example, if someone asks you “Did you murder so-and-so?”, you’re quite free to say “No I didn’t.” But if they use an Ability to make you show your Secret, you mustn’t lie and say that you don’t have a Secret to show. It might sound like a subtle distinction when written down like this, but in practice players are able to understand that they must be honest ‘as players’ even if their characters aren’t always honest.

2 thoughts on “Telling lies in our murder mystery games”