Last weekend Mo and I attended The King’s Musketeers, a weekend long game set in the swashbuckling world of Cardinal Richelieu and Queen Anne, of D’Artagnan and the Three Musketeers, of the Duke of Buckingham, Rene Descartes, and Cyrano de Bergerac. I was Count-Duke Olivares and ruled Spain and Mo was Count de Soubise, a scheming rebel hero. 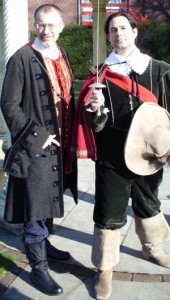 Steve (left) and Mo (right() at The King’s Musketeers

The King’s Musketeers is played very much like our murder mystery games – but much, much bigger:

Although there were murders in The King’s Musketeers (several!) it’s not really billed as a murder mystery game. Instead, it’s a kind of “LARP”, which stands for “live action role play” which spun out of the roleplaying games hobby (such as Dungeons & Dragons). In the UK and Australia this kind of LARP is known as a “freeform”, while in the USA they are better known as “theater style larps”. Whatever you call them, the emphasis is on playing the character in whatever the setting may be – and a murder is optional. At Freeform Games we take some elements of freeforms/theatre style larps and turn them into murder mystery games.

Anyway, both Mo and I had a wonderful time playing our characters – although because the game was so big and we were involved in very different plots, we barely spoke to each other at all.

By some measures we might not appear to have had a good game – by the end Spain had barely half the power that it started with and Mo’s character died on the Sunday. But we don’t judge the game on whether we succeeded in our goals or whether we survived, we judge these games on whether we had a good time or not – and we both had a great time and are looking forward to the next one!

The King’s Musketeers is being re-run in October 2013, in the USA (on the East Coast somewhere). When I get details, I’ll post them here.

Here in the UK, 2014’s weekend freeform will be Cafe Casablanca, which is based upon Casablanca and lots of other Humphrey Bogart films (and more!), and is already full! We’ll tell you all about it.

3 thoughts on “The King’s Musketeers”