Update – actually, we’ve had to take everything down from Amazon, alas.

The Speakeasy Slaughter, our upcoming 1920’s Prohibition game for 15 to 32 guests, is making progress. Our playtest in London didn’t happen in September as originally planned, but we’re still hoping to get another playtest in later this year. We’ve provided a wealth of comments that author Becky Channon (who previously wrote A Heroic Death) is working on. Expect to see The Speakeasy Slaughter some time in 2014.

Following hard on the heels of The Speakeasy Slaughter is Death on the Rocks, by Jessica Andrews, and is just entering its first playtest. 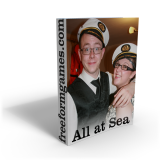 Steve is revising All at Sea, one of our older games. We’re making cosmetic changes to bring it up to our current standards (so character booklets for everyone) and tweaking a few of the characters to make them more fun to play.

And after this? We’ve got plenty more to keep us busy!

4 thoughts on “What we’re working on right now”