Welcome to another issue of our occasional newsletter. In this issue we talk about:

Our new game for the holiday season, Christmas Lies

We already had one holiday game – the very popular The Night before Christmas – but it is designed for up to 15 players. What about larger parties?

The answer was right in front of us! We've put together a special Christmas version of our classic Hollywood Lies – so take a bow, Christmas Lies!

Despite this note of sadness, celebrations are in full swing at the Christmas Confidential post-award party. Deals are being cut for future productions and everyone is having a good time enjoying the atmosphere and mingling with Hollywood's movers and shakers.

Is there anything suspicious about Tom Speed's death? Who will win next year's Santas? Find out at Christmas Lies. 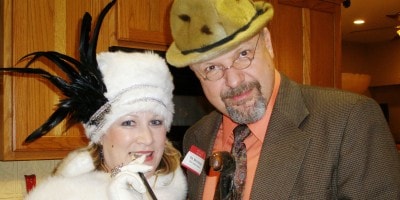 (This is a picture from The Night before Christmas – we don't have any yet for Christmas Lies!)

Just click here to find out all about it!

"We usually try to get all the ballots in by mid-game, but since few obey, we accept them until we have votes tallied. You guys are right, it is a great way to wrap up the evening. People enjoy getting them, and the cost is minimal."

We're on Twitter @freeformgames but we're not very good at using it...

Luckily, some of our customers are a bit better at using Twitter than we are:

Last night was absolutely fantastic! We discovered many secrets and put a stop to plenty of evil plots... We just didn't manage to catch the murderer! ??????? @FreeformGames #AHeroicDeath pic.twitter.com/BHdXTthnGr

Converting Curse of the Pharaoh

They reinterpreted Curse of the Pharaoh as The Curse of the Ancients and set it in a railway station rather than an archaeological dig. But apart from that, the game was pretty much the same.

The conversion materials are later posts, and happily it sounds like the game was a success:
https://www.enworld.org/threads/my-campaign-journal-postings-updates-every-two-weeks.493803/#post-7061652

And in case you're wondering – we're delighted when our customers do this kind of thing.

The Reality Is Murder

We received a great report of The Reality is Murder from Petter Olsen.

"We just finished The Reality is Murder with 30 players and 2 GMs, and it was excellent! Not sure if the big money prize went to the most deserving winner (or even to the actual winner), but there were certainly enough intrigues, secret identities, extortion, betrayals, love triangles, live TV drama, proposals, and marriages. The "live" TV broadcast that we all contributed to would certainly have been worth seeing; pity that we did not actually film it…"

You can also find us on Facebook at https://www.facebook.com/freeformgames/