Second in our occasional author profiles, this time it’s the turn of Becky Channon – author of A Heroic Death and A Speakeasy Murder.

Becky grew up in London, England, and (mis)spent her youth writing comic short stories with her brother. Much later, her brother asked her to write him a funny superhero-themed murder mystery party for his upcoming birthday. Becky wrote this in a couple of weeks, and the party was very successful. 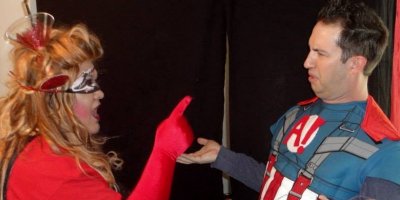 A dramatic moment in Becky Channon’s A Heroic Death

Having previously hosted both Curse of the Pharaoh and Death on the Gambia, Becky was already a fan of Freeform Games and saw on our website that we were looking for new writers. So after the party she decided to submit her game.

We were interested in her superhero game, but Becky was surprised to find that the process of transforming her game to fit the Freeform Games template (along with adding extra characters, playtesting, and editing) took considerably longer than writing the original game. However, nearly two years later A Heroic Death was released.

As a fan of the 1920s, Becky had been disappointed that Freeform Games didn’t include a 1920s speakeasy-style game in our catalogue. And as there still wasn’t one after A Heroic Death was published, she decided that she’d have to write it herself. 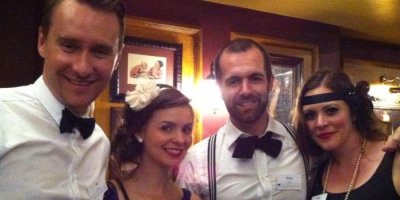 This new game was almost three times the size of her first, but Becky knew the process now and A Speakeasy Murder was produced and developed faster than her first game, despite it being much harder to find enough volunteers to playtest it.

Becky had enormous fun cramming the game full of as many cultural references as she possibly could. Can you spot them all?