We provide a timetable with all our games, covering the murder mystery party in detail. The timetable typically includes the briefing, key events (such as when clues are released), the point at which characters can die (for those games that involve fighting), and the end of the game. 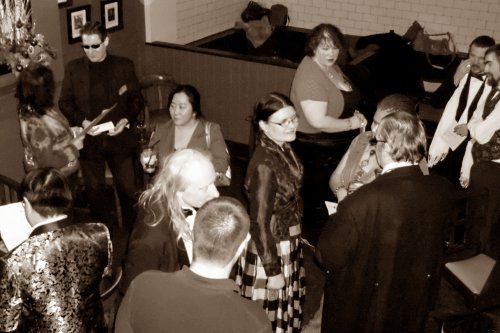 We estimate that our games take about 2.5 to 3 hours to play through. However, these times are approximate – some groups will be faster and some will take longer.

The main variables on the length of game are player experience and size of group. In general we’ve found that a larger group takes longer to play one of our murder mysteries than a smaller group. (Even the same game takes longer with more players.) The main reason for this is that is simply takes longer to find those you need to talk to in a larger group – and you may be drawn in into other people’s stories.

So given those variables, when do you draw the murder mystery to a close?

A mixture of chemistry, character and personality

Towards the end of the murder mystery, you will start to find players who have achieved all they are going to achieve, while there will be others still chasing around trying to finish their goals. In my experience (as a player and a host), this always happens and is a natural result that arises from mixing of the following:

So this variation means that some people will “finish” their game sooner than others. So when do you end the game?

When to end the murder mystery

My preference when I’m playing is that I would rather run out of time (and not quite finish everything I need to do) than have too much time (and be waiting for the game to finish).

As a host, this therefore means that once all the other timed events have passed and we’re in the last segment, then I am monitoring the game. It’s hard to explain exactly what I’m looking for, but I am monitoring the overall energy in the room. I’ve found that as a game progresses towards its climax, some players become less involved because they have achieved all their goals (or some of them have become unachievable). And as more players become less involved, the energy drops – and that’s the time I draw the game to a close.

Sometimes I’ll see players who appear to have stopped playing the game. If that happens, I usually check with them to see if they have actually stopped, or whether they are just taking a break for a couple of minutes before resuming.

It can sometimes be challenging to monitor the energy in the room, particularly if the murder mystery involves combat. If I’m not careful, overseeing combat involves so much of my attention that I can forget check the rest of the game. (This is an excellent job for a co-host, if you have one.)
So of course this means that I can’t predict the exact end time of the game – it will be an approximation. So if the scheduled end time is approaching and the game still seems to be going well, then I will let it continue. Conversely, I will draw the game to a close early if things have slowed and some people have stopped playing.

Once I’ve decided to end the game I make an announcement that the game will be ending in ten minutes. This gives those that haven’t finished sufficient warning that the game is ending – and quite often the ten minute warning creates extra activity (and energy!) as people suddenly realise that they are about to run out of time. (That’s not a reason to keep playing beyond those ten minutes, though!)

Timing the end of a game is an art, not a science. Ultimately it comes down to a host’s judgement – but it’s worth remembering the old adage “Always leave them wanting more…”