That's right, we're giving away one of our terrific murder mystery party games, completely free of charge. Anyone who wants to can download a copy of the game!

The Way out West Free murder mystery game kit will allow you to host a fabulous Wild West party, just like our regular games do. The only difference is that this free version is for 10 guests only, rather than 10–24 like the paid-for version: and that it's completely free of charge!

To get your free copy of Way out West all you need to do is follow this link:

"We love hosting parties and needed something new so first we tried the store-bought box games and while it was fun… we felt there was NO creativity and we basically read from a script and it was impossible to guess the culprit even when everyone had all the information. So the next time I did an internet search and found your site and saw the free game Way out West and since there was no risk decided it wouldn't hurt to try for our Halloween party!
I had a fun time planning it and more fun being the host! And all our guests had a blast too! There was a bit of a learning period for about 30 min while everyone was a bit apprehensive to do something and trying to figure everything out but once they did, we had a hard time getting the game to end because everyone was having so much fun! Some of our guests didn't know each other but this game made it so it didn't matter and everyone could still have fun!
We did that game last year and since then, everyone keeps asking when we are doing another one! So now I'm back to your site to find a new game to do for our New Year party! I'm so excited and you have so many to choose from!"
Alyse Wilkins, United States

It is the spring of 1884. America's west coast is slowly being populated with small towns full of settlers, coming to prospect for precious metals, set up ranches and run dubious saloons. Now the railway is coming! Cactus Gulch is one such small town. Founded 20 years ago, tonight it has a festive air as the townsfolk get set to start their 20th anniversary celebrations. Plus, the railway is coming! However, all is not running smoothly. Land disputes, disreputable card games, strange folk from out of town and hostile Indians are all adding to a tense atmosphere… 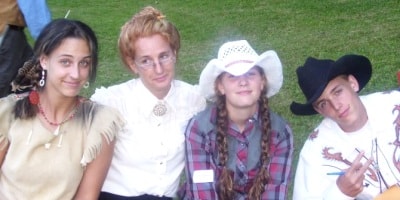 Join us in a thrilling evening of scheming, intrigue and skulduggery. You will be in the middle of the action and it will be up to you to wheel and deal with the other guests. Can you achieve your goals, keep your secrets hidden and survive Way out West? It's up to you.

"We played Way out West on New Year's Eve and really enjoyed it a lot. I have flagged your website in my favorites so we can easily access you next year if not before. Thanks for all of your hard work on this game."
Jackie Vick, Minnesota, United States

Way out West lasts for about four hours and is suited to an evening. It is often played over a meal – a finger buffet if possible to allow guests to circulate and talk in private.

"Thanks for a great Way out West party – definitely recommend it to friends!"
Mel Woods, London, United Kingdom 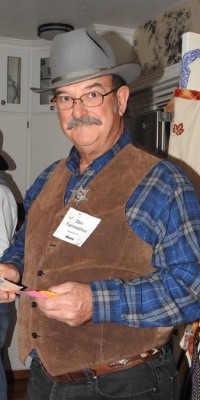 These are the characters in Way out West Free:

and these are the extra characters that you can get in the paid-for version of the game:

As you will find out, Way out West is unlike many murder mystery games. Although the game starts with a murder, most of the characters have more important things to do than to investigate it. And the killing may not be over - it is unlikely that everyone will survive the remainder of the evening!

Unlike most boxed murder mystery games, Way out West lets your guests decide how to achieve their goals and thwart their enemies.

"We received your game, Way Out West, and had our party last weekend. It was a huge success. Everyone went all out on their costumes and the game flowed smoothly. Thanks for your great customer service!"
Lisa and Anthony Perez, Oregon, United States

On the evening of the game the guests are met by the organizer, the Bartender of the Silver Dollar Saloon. They then receive their detailed backgrounds - including dark secrets, objectives and money. When everyone has arrived the celebrating starts, but it is immediately disrupted by a shocking announcement. The real fun then begins as everyone questions, bribes and blackmails each other.

As the evening progresses they may even try to murder one another! Along the way they may solve some of Way out West's mysteries.

You can download your free copy of Way out West, which includes everything you need to host the game, just by clicking the link below. This will not share any of your personal data with us.