Here's what people have been saying about A Speakeasy Murder:

"My wife and I just did A Speakeasy Murder (Halloween 2014) in our home for 32 guests. We had a BLAST. We are already planning to do another of these games next Halloween. Our friends are still talking about the party. We have a huge list of things we will do differently next time to make it even more fun for them and easier for us."
Mark Wolff

"My husband & I completely rented an old hotel, converted its lobby into a speakeasy, involved the staff in our game, and ran A Speakeasy Murder all weekend! Guests loved that they always had things to do, that there were 'easy' parts as well as more challenging roles, and that even if people didn't figure out how the murderer was, they could still talk smack about accomplishing other goals (like killing a rival, finding a lost heirloom, or making some money…)"
Angela James, USA

"Over the last couple years since our friend invited us to a play-through of Curse of the Pharaoh we fell in love with your games and have since gone to two more of your mysteries run by our friend. Last year my girlfriend hosted Dead Man's Chest and for our New Years Eve party last year I hosted A Speakeasy Murder Mystery. I just wanted to thank you for writing up some awesome games, I've never seen a person frowning by the end of any of your mysteries (well if you don't count excessive drinking).I could tell you all of the escapades in our mysteries, but mostly I just wanted to thank you all again."
Jesse Felzien

"We ran A Speakeasy Murder last weekend with 22 guests and 1 host. This was our fourth Freeform Game and the largest one yet. A great time was had by one and all, including our brand new guests. I think this one was my personal favorite for the creative costumes our guests came in.
I asked each of our guests for their “mug shot” before we started play and put together this compilation. I thought you would enjoy it!
Thank you for another excellent game."
Amy Diaz, United States

"The story was so much fun! We had close to 30 people and all were praising the event all night. It was a great interactive experience that we would definitely do again!"
Taylor Coleman, United States 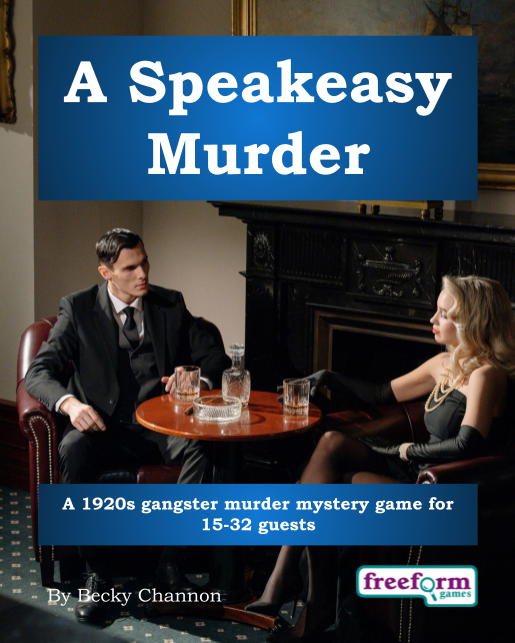 Recommended for ages 18+
Costs US$49.99
Written by Becky Channon

A Speakeasy Murder is a murder mystery party game for 15 to 32 guests and one or two hosts – download the free introductory pdf file.

Join us in a dazzling evening of evening of Prohibition, showgirls, gang-wars and murder. You will be in the middle of the action and it will be up to you to wheel and deal with the other guests. Can you achieve your goals, keep your secrets hidden and survive A Speakeasy Murder? It's up to you.

Anybody who is anybody is here at Fat Stan's Speakeasy tonight. Al and the band are desperately belting out their jazziest tunes, Lola and the girls are singing and dancing like their lives depended on it, and Tony the barman is handing out Stan's Specials like there's no tomorrow.

Which there won't be, for poor Scabface Martins. He was one of Fat Stan's pals, and a very popular guy down at the Speakeasy. A masked hoodlum in a long black cloak burst into the room during the interval after Lola's big number, and the poor sap was peppered with so many bullets he looked like a swiss cheese.

The only way in or out of the Speakeasy is through the secret door from Dora's Dress Shop, and the doorkeeper swears that nobody has come through that door in either direction for over an hour. So it figures it musta been someone in the Speakeasy that plugged Scabface, and even worse: they're still in here now!

Officer Pilkington is one of the regulars, so everyone's waiting for him to work out who dunnit. Too bad he's as dumb as a sack of bricks. The only thing he's managed to do right so far is to lock the exit and search the back rooms for hidden hoodlums. He found nobody.

Fat Stan is determined that everything should carry on like there ain't no problems: so the remains of poor Scabface have been put in the Janitor's cupboard and, after a quick cleanup by Pickles the cleaner, the show is carrying on with fevered intensity. But who coulda wanted Scabface dead? Which one of the crooks, bums and no-hopers that make up the Speakeasy's staff and guests is the filthy lowlife that plugged him? And do they plan to strike again?

A Speakeasy Murder lasts for about four hours and is suited to an evening. It is often played over a meal – a finger buffet if possible to allow guests to circulate and talk in private.

"Ever since playing Cluedo as a kid I have wanted to be in a "real" murder mystery. I made it a goal within my 30 before 30 bucket list, and so for my 28th birthday was able to live out my childhood dream!
A Speakeasy Murder did not disappoint- it was all of our first times playing a game like this, and we all got a bit confused (doorkeeper included – whoops!) but everyone had so much fun and we are planning on doing murder mystery every winter. Thanks for the twists and turns! A great evening! "
Laura Dallaston, New Zealand

The free introductory pdf file contains an introduction to the game, a cast list of all the characters, and a copy of the Chicago Courier – plus details of how to buy the game.

These are the characters in A Speakeasy Murder:

A Speakeasy Murder is unlike many murder mystery games. Although the game starts with a murder, most of the characters have more important things to do than to investigate it. And the killing may not be over – it is unlikely that everyone will survive the remainder of the evening!

"I would love to play again!"
Bez (playtester),

On the evening of the game the guests are met by the organizer, the Doorkeeper, and welcomed to Fat Stan's Speakeasy.

They then receive their detailed backgrounds – including dark secrets, objectives and money. The fun then begins as they form alliances, blackmail each other, steal items and maybe even try to murder one another! Along the way they may uncover some of the mysteries of A Speakeasy Murder. Who is smuggling hooch, and who is brewing moonshine? Who are The Chimera and Balthazar? Who carried out the St Swithin's Day Massacre? Who wants to be a Hollywood talkies star, and who once robbed a train? And, of course, who killed Scabface Martins?

Depending on what the players choose to do, there are several different possible endings, but finally everyone finds out how they did, and what secrets everyone else was concealing.

A Speakeasy Murder costs US $49.99. You can buy it from anywhere in the world. The price will be converted back into your own currency for you, at today's exchange rate.

We offer a Cast Iron Guarantee on all our murder mystery games. If you're not completely satisfied with A Speakeasy Murder then please let us know within 30 days and we will refund you. See our full terms and conditions here.