Here's what people have been saying about Death in Venice:

"What a great evening.
We decided to play Death in Venice over Zoom in the end as we had issues with discord and it worked so well.
We made everyone a co-host so they could then go between rooms themselves and only brought them back to the main room for announcements. The time flew for everyone. We had a lot of couples playing one character which they loved as they could strategise and plan together.
Thank you so much for a great time. I really love your games and so do all my friends and family."
June Wilson, UK 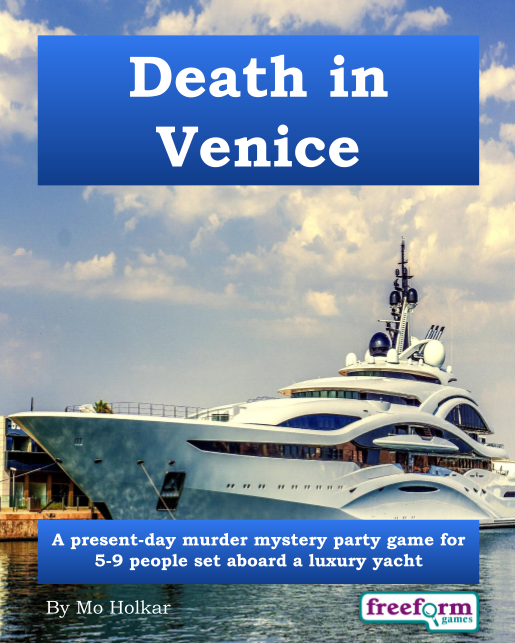 Recommended for ages 15+
Costs US$29.99
Written by Mo Holkar

Death in Venice is a murder mystery party game for 5 to 9 people including a host – download the free introductory pdf file.

THE HOST CAN PLAY TOO! – this murder mystery game has been specially designed so that the host can play a character investigating the murder, just like everyone else, if they wish to do so. And it's great for playing online, too!

Join us in an evening of film-festival fury, movie-making misbehavior, and murder. You will be in the middle of the action and it will be up to you to wheel and deal with the other guests. Can you achieve your goals, keep your secrets hidden and survive Death in Venice? It's up to you.

Last night at the glamorous Venice Film Festival, controversial director Clay McFarland picked up the prestigious Golden Lion award for this season's hit movie Never Look Back. But this morning, he was found lying in front of St Mark's Cathedral – hacked to death with a meat cleaver.

The stars of the movie and some of their guests supposedly spent the night sleeping off the effects of the post-awards party, on the Casanova, their luxury yacht moored in the marina – but it seems that someone was up to no good. Traces of McFarland's blood found on the Casanova's dinghy mean that police are confident that the culprit is one of those who are now confined aboard the yacht.

As cathedral bells toll out across the ancient city, on board the Casanova a frothy ferment of vineyards, memoirs, gossip, jealousy, and movie-set punch-ups will come to the boil.

Charge your glasses, put on your designer sunglasses, and join the cast and crew of Never Look Back as they try to solve the mystery of Death in Venice!

Death in Venice lasts for about four hours and is suited to an evening. It is often played over a meal – a finger buffet if possible to allow guests to circulate and talk in private. And it can also easily be played online using video chat – such as Google Chats, Skype, Discord, Zoom or similar.

The free introductory pdf file contains an introduction to the game, a cast list of all the characters, and a copy of the Celebrity Online – plus details of how to buy the game.

These are the characters in Death in Venice:

Death in Venice is unlike many murder mystery games. Although the game starts with a murder, most of the characters have more important things to do than to investigate it.

On the evening of the game the guests are met by the organizer, the Chief Steward, and welcomed to the Casanova. They each have their detailed backgrounds – including dark secrets and personal objectives. The fun then begins as they form alliances, blackmail each other, lie, cheat, and deceive! Along the way they may uncover some of the mysteries of Death in Venice. Who punched who on the set of Never Look Back, and why? Who is The Child in the Sailor Suit, and who will play their parents? And, of course, who is the murderer of Clay McFarland? Depending on what the players choose to do, there are several different possible endings, but finally everyone finds out how they did, and what secrets everyone else was concealing.

And the host can play too! Unlike most of our other games, the host can also play a character in Death in Venice. We've provided a version of the game that means that the host can play – just be careful not to read the files before you start playing. (And if you want to host the game without playing a character, you can do that as well.)

Death in Venice costs US $29.99. You can buy it from anywhere in the world. The price will be converted back into your own currency for you, at today's exchange rate.

We offer a Cast Iron Guarantee on all our murder mystery games. If you're not completely satisfied with Death in Venice then please let us know within 30 days and we will refund you. See our full terms and conditions here.