Here's what people have been saying about Lei'd to Rest:

"Last night we played Lei'd to Rest. It was a hit! We had people who have played before and some newcomers to the game. Everyone got dressed up and had a great time. The guests were impressed by how well written the roles were, while still allowing them to make them their own.
We took a break at the midpoint for a hula contest. The men were hysterical.
I highly recommend it! We also loved Bludgeoned on Broadway and Snow Business. "
Kelly , United States

"I wanted to let you guys know that we purchased Lei'd to Rest for my sister's sweet 16 birthday bash! We played last night and I could not wait to get up today and let you know that it was a wonderful game! Everyone had a fantastic time playing, and the storyline was quite... intriguing! Kudos to the writers of the game, and I cannot wait to purchase another one! We are already trying to plan a time to play again!!!"
Heather Smith, United States

"Wanted you to know we hosted Lei'd to Rest for 8 high school students (11th and 12th graders). They had a blast! This is our third game (after Final Curtain, Reading of the Will) and it was the best yet. The kids especially enjoyed the ability cards. And having a corpse for them to discover really got them into the spirit of the game. We used oatmeal for the victim's vomit -- it was so lifelike, our son almost gagged. We highly recommend your games and look forward to our next game. Thanks for a great product!"
Rita Tallini, Georgia, United States

"Everyone had a great time doing Lei'd to Rest. I attended another murder mystery game by [a different company] 2 months later and I noticed the game, plot were not nearly as interesting as this one so stick with Freeform Games. The customer service with this company is excellent and they are true to their word. And very few other companies offer a money back guarantee so there is no risk."
Kendra Pearsall, United States

"The Lei'd to Rest party was a tremendous success. It was the first "downloaded" murder mystery we've done. It was very cool that guests could think "out of the box" enough to actually use the items they had in their possession rather than just thinking of them as clues.
Everyone involved got into their roles very well and thoroughly enjoyed it. We can't wait to play again!"
Paul Weiss, United States

"I just wanted you to know that we played Lei'd to Rest this last weekend and we had so much fun! I've thrown other murder mystery parties from kits and boxes and I think this was the funnest yet. No script, which left it open for interpretation. That makes it seem like the game is confusing, but once the rules were explained, people got it and had a blast! Everyone got way into it and someone even tried to murder the murderer! Next time I throw a murder mystery party, I'm definitely getting it here! Thank you so much for such a fun product!!"
Megan McGrath, United States

"Lei'd to Rest was a really great time. I love the flexibility for the game to go in so many directions. I think after each game, guests have started to realize the freedom and come up with stuff they can do that isn't necessarily on their sheet or in their items. "
Stephanie Wagner, United States 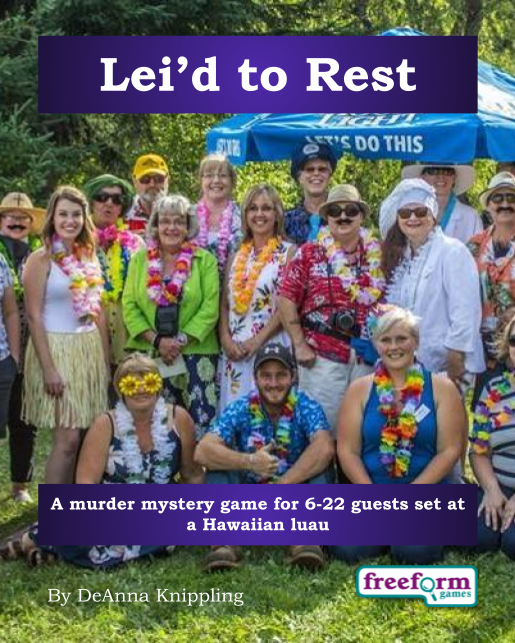 Recommended for ages 15+
Costs US$29.99
Written by DeAnna Knippling

Lei'd to Rest is a murder mystery party game for 6 to 22 guests and a host – download the free introductory pdf file.

Join us in a thrilling evening of sun, sand, legend, lies, treachery and murder. You will be in the middle of the action and it will be up to you to wheel and deal with the other guests. Can you achieve your goals, keep your secrets hidden and survive Lei'd to Rest? It's up to you.

It's the present day on the island of Hawaii. The local culture, exotic and isolated for centuries, is being eroded by the constant stream of tourists flooding through the airports. All sorts of people rub shoulders at the resorts. Most of them are innocent travellers, but some of them have ulterior motives.

Lokuhai Beach is a small, isolated beach in the loneliest part of Harmony Cove. The beach itself is owned by Harmony Cove Resort, about a half-hour drive through rocky, mountainous countryside. Advertised as the "Last Real Hawaiian Beach", it's gorgeous. Birds of Paradise call to each other past the vibrant orchids -- you could make your own lei in minutes -- and jewel-toned lizards beg for table scraps. The music of the forest harmonizes with a nearby waterfall, cascading down the side of a steep hill through pools and sparkling in the sunset as it runs into the cove.

The luau started badly... the bus broke down on the way to the beach, and everyone had to walk the last fifteen minutes. Everyone's cell phones seem to be unable to reach out of the mountains to the resort (or anywhere else), and the driver has been unable to get the bus running again. One of the guests, Joe Markham, has been trying to help get it started...

Lei'd to Rest lasts for about four hours and is suited to an evening. It is often played over a meal – a finger buffet if possible to allow guests to circulate and talk in private.

"Just downloaded Lei'd to Rest – first time I have downloaded one of your games. We intend to play the game in May – but I just wanted to say how good the game looks – and so easy to download."
Dave Measey, Leicester, United Kingdom

The free introductory pdf file contains an introduction to the game, a cast list of all the characters, and a copy of the Legend of the Red Goddess – plus details of how to buy the game.

These are the characters in Lei'd to Rest:

And here are the extra characters that you get if you purchase Lei'd to Rest Expanded:

Lei'd to Rest is unlike many murder mystery games. Although the game starts with a murder, most of the characters have more important things to do than to investigate it. And the killing may not be over – it is unlikely that everyone will survive the remainder of the evening!

"We'd previously played Bludgeoned on Broadway, so I knew Lei'd to Rest would be a superior game. I love the completeness of the materials, well developed characters and back stories, and as host, ease in running."
Sara Duprey, United States

On the evening of the game the guests are met by the organizer, the Bus Driver. They then receive their detailed backgrounds -- including dark secrets, objectives and special items. The players can form alliances, blackmail each other, steal items and decide what they plan to do next season. Along the way they may solve some of Lei'd to Rest's mysteries. Are the locals poisoning people? Who threatened the starlet? How are the wealthy businessman and the victim connected? Is someone threatening the tourists? What makes a smuggler so interested in an innocent-looking Midwestern newlywed? All will be revealed in Lei'd to Rest.

Lei'd to Rest costs US $29.99. You can buy it from anywhere in the world. The price will be converted back into your own currency for you, at today's exchange rate.

We offer a Cast Iron Guarantee on all our murder mystery games. If you're not completely satisfied with Lei'd to Rest then please let us know within 30 days and we will refund you. See our full terms and conditions here.