Here's what people have been saying about Murder on the Istanbul Express:

"We just finished playing Murder on the Istanbul Express, and we had a great time! Definitely plan to do it again. All in all, great experience, and definitely way better than I expected! Thank you for providing us with a great evening! :)"
A Customer, USA 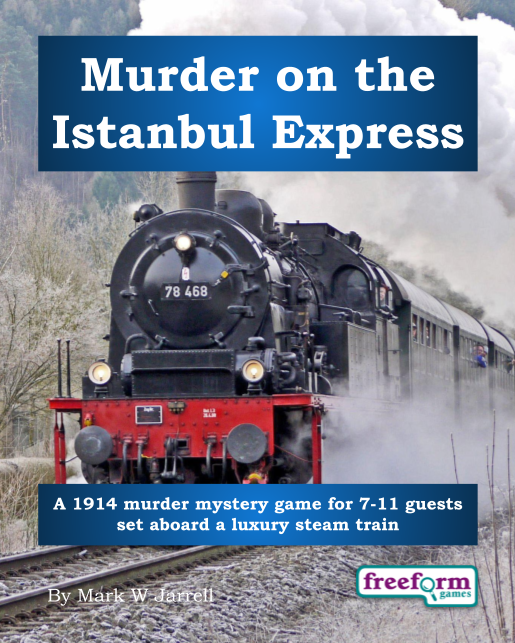 Recommended for ages 12+
Costs US$29.99
Written by Mark Jarrell

Murder on the Istanbul Express is a murder mystery party game for 7 to 11 guests and a host – download the free introductory pdf file.

NEW RELEASE! Be one of the first to try this brand new game.

Join us in a thrilling evening of luxurious travel, intrigue, and murder. You will be in the middle of the action and it will be up to you to wheel and deal with the other guests. Can you achieve your goals, keep your secrets hidden and survive Murder on the Istanbul Express? It's up to you.

Murder on the Istanbul Express

The luxurious Istanbul Express takes three days to travel between Istanbul, Turkey and Paris, France. The train line is lavishly opulent and has a glowing reputation. Tonight, some of Europe's most notable citizens and travelers (and some who are not so notable) are journeying in style through the European countryside.

Two days ago (June 29, 1914), just before the train left Istanbul, newspapers announced that Archduke Franz Ferdinand of Austria, heir to the throne of Austria-Hungary, had been assassinated in neighboring Bosnia. Everyone is now on edge – this could be the start of a great war.

A further trouble is the discovery of a dead body in the kitchen car this evening. Selda Zaim, the maid of Turkish merchant Esra Hoca, appears to have been bludgeoned over the head with a cooking pot.

It is now midnight and only a few hours until the Istanbul Express arrives in Paris and the proper authorities can investigate the crime. But until then, there are many mysteries to unfold…

Murder on the Istanbul Express lasts for about four hours and is suited to an evening. It is often played over a meal – a finger buffet if possible to allow guests to circulate and talk in private.

The free introductory pdf file contains an introduction to the game, a cast list of all the characters, and a copy of the Istanbul Gazette – plus details of how to buy the game.

These are the characters in Murder on the Istanbul Express:

Murder on the Istanbul Express is unlike many murder mystery games. Although the game starts with a murder, most of the characters have more important things to do than to investigate it.

On the evening of the game the guests are met by the organizer and welcomed to the Istanbul Express. They then receive their detailed backgrounds – including dark secrets, objectives and money. The fun then begins as they form alliances, blackmail each other, steal items and maybe even try to murder one another! Along the way they may uncover some of the mysteries of Murder on the Istanbul Express. Who has been stealing historical artifacts? Who is here under a false identity? What happened to the promising new radio technology? And, of course, who killed Selda Zaim? Depending on what the players choose to do, there are several different possible endings, but finally everyone finds out how they did, and what secrets everyone else was concealing.

Purchasing Murder on the Istanbul Express

Murder on the Istanbul Express costs US $29.99. You can buy it from anywhere in the world. The price will be converted back into your own currency for you, at today's exchange rate.

We offer a Cast Iron Guarantee on all our murder mystery games. If you're not completely satisfied with Murder on the Istanbul Express then please let us know within 30 days and we will refund you. See our full terms and conditions here.