Here's what people have been saying about Reunion with Death:

"What a great way to do a murder mystery without anyone having to leave their home. We loved Reunion with Death… We had a few concerns on how this would work online, but it did! We played on google hangouts and used a Facebook group chat where we were able to change the names to our character names. Private chats were happening by text, messenger, and phone calls. It was great. Once again a great story and a great game!"
Mike Munoz, United States

"I organised a group of friends, some who didn't know each other and we had a blast with Reunion with Death. There's not too much pre-reading required of the participants and it was great to be able to join in as a host (not overly demanding of a job).
This was my first Freeform game and I was impressed with the design, there's enough plotlines, secrets, clues and intertwined relationships that make the time fly by. Even virtually, everyone got into their characters and once we got into a rhythm with the tech we were buzzing by the end of it. Would definitely recommend as a little escape from the lockdown and everyone is keen to join for another."
Sam Soo, Australia

"Hosted Reunion with Death on the weekend and it was an absolute blast! … It worked really well and everyone had a great time; feedback from one of my friends who has done a few conventional murder mysteries said she loved it and felt it was so much more high pressure than usual which was great … All in all another successful murder mystery! Thanks a heap."
Terence Smith, Australia

"I am hopeless when it comes to computer skills, but the instructions for how to host Reunion with Death over google hangouts were so simple and clear, I had no problem setting up the rooms and sending out links … I will admit I was skeptical – and I actually had many guests admit to me that before the party they had many misgivings about how the whole thing would go down, thinking there may be too many tech issues, worrying about how the switching between rooms would work, and believing the remote nature of the whole thing would detract from the experience. But everything went smoothly, and I'm still receiving calls from the guests telling me how much fun they had. "
Kristen Hanneman, United States

"I thought everything about Reunion with Death was great! The interwoven storylines were good, I liked the clues and the slow release of information throughout the evening."
Cerys , 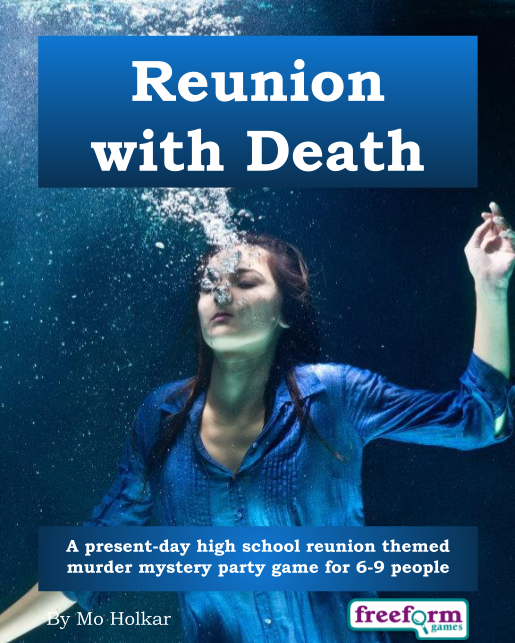 Recommended for ages 18+
Costs US$29.99
Written by Mo Holkar

Reunion with Death is a murder mystery party game for 6 to 9 people including a host – download the free introductory pdf file.

THE HOST CAN PLAY TOO! – this murder mystery game has been specially designed so that the host can play a character investigating the murder, just like everyone else, if they wish to do so. And it's great for playing online, too!

Join us in an evening of high-school grudges, present-day rivalries, and murder. You will be in the middle of the action and it will be up to you to wheel and deal with the other guests. Can you achieve your goals, keep your secrets hidden and survive Reunion with Death? It's up to you.

A 15-year high-school reunion, in smallish-town America. Former students are gathering in the town's main hotel, ahead of the big party tonight. But one of them, former prom queen Mikolette Lukanis, has been found murdered!

Everyone is locked in together in the hotel ballroom where the gala was to have taken place, pending a full police investigation. High-school rivalries will re-emerge, old grudges and secrets will surface: along with a heady mix of present-day envy, betrayal, and lust.

Get out your glad rags, consult your old high-school yearbook, head for the complementary bar, and join the alumni of Holborrow High as they prepare for their Reunion with Death!

Reunion with Death lasts for about four hours and is suited to an evening. It is often played over a meal – a finger buffet if possible to allow guests to circulate and talk in private. And it can also easily be played online using video chat – such as Google Chats, Skype, Discord, Zoom or similar.

"I have hosted at least 8 in-person Freeformgames murder mystery parties, so I was excited to do a virtual one for once!… The game was SO fun! Everyone had a great time, and is still talking to me and each other about it!… Overall, I am VERY satisfied, and they all keep asking me when the next one will be!"
Rob Newbold, United States

The free introductory pdf file contains an introduction to the game, a cast list of all the characters, and a copy of the Holborrow Courier-Bugle – plus details of how to buy the game.

These are the characters in Reunion with Death:

Reunion with Death is unlike many murder mystery games. Although the game starts with a murder, most of the characters have more important things to do than to investigate it.

"We've played Reunion with Death twice – I hosted for some of our regulars and for my daughter and her friends (800 miles north of us). It was well received by both groups."
Mark Rickert, United States

On the evening of the game the guests are met by the organizer, the Hotel Manager, and welcomed to the Sturner Palace Hotel. They each have their detailed backgrounds – including dark secrets and personal objectives. The fun then begins as they form alliances, blackmail each other, lie, cheat, and deceive! Along the way they may uncover some of the mysteries of Reunion with Death. Who is secretly a drug kingpin? How fifteen years ago, did high-school girl Marcie Matthews die? What will be the fate of local radio station KHOL? And, of course, who is the murderer of Mikolette Lukanis? Depending on what the players choose to do, there are several different possible endings, but finally everyone finds out how they did, and what secrets everyone else was concealing.

And the host can play too! Unlike most of our other games, the host can also play a character in Reunion with Death. We've provided a version of the game that means that the host can play – just be careful not to read the files before you start playing. (And if you want to host the game without playing a character, you can do that as well.)

Reunion with Death costs US $29.99. You can buy it from anywhere in the world. The price will be converted back into your own currency for you, at today's exchange rate.

We offer a Cast Iron Guarantee on all our murder mystery games. If you're not completely satisfied with Reunion with Death then please let us know within 30 days and we will refund you. See our full terms and conditions here.