Here's what people have been saying about The Food is to Die For:

"We went for The Food is To Die For at the end and had an absolute blast.
We've played the game online in the gather.town virtual space (created restaurant themed rooms and such) and that worked incredibly well! People could just spread out and move between conversations quite naturally. We had to hop on zoom for the debriefing though, since gather.town only allows 9 video feeds to be visible on the screen, and people wanted to be able to see everyone else for this last part of the game :)
If the lock-down continues, weâre definitely going to be playing another murder mystery on gather.town sometime soon! :) Thanks for making such amazing games – they really are a wonderful entertainment, even in covid times! :) "
Paulina Kieliba, United Kingdom 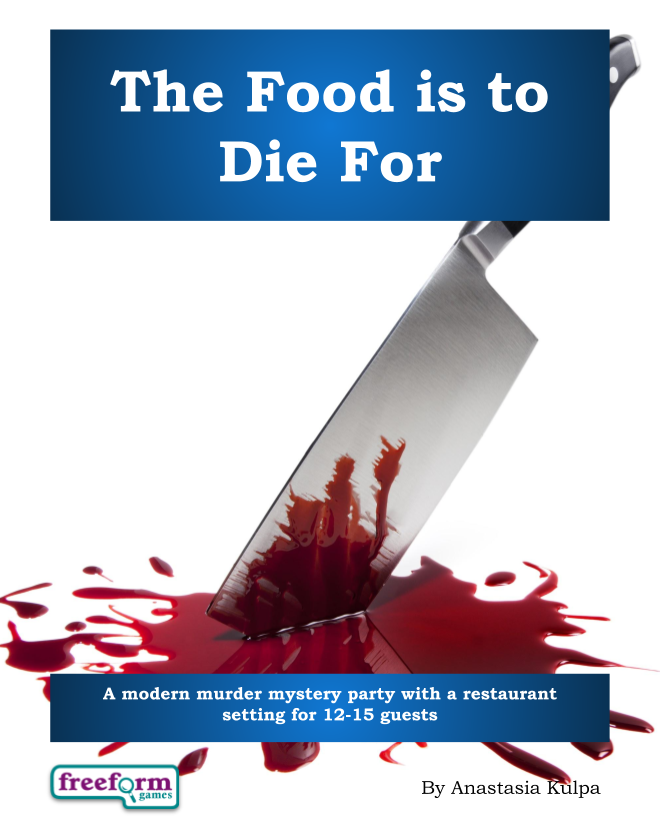 Recommended for ages 15+
Costs US$29.99
Written by Anastasia Kulpa

The Food is to Die For is a murder mystery party game for 12 to 15 guests and a host – download the free introductory pdf file.

NEW RELEASE! Be one of the first to try this brand new game.

Join us in a thrilling evening of delicious food, scandals started and revealed, and murder. You will be in the middle of the action and it will be up to you to wheel and deal with the other guests. Can you achieve your goals, keep your secrets hidden and survive The Food is to Die For? It's up to you.

The Food is to Die For

At The Food is to Die For, Pierre Baudelaire's restaurant changes names faster than playboys change girlfriends. Nobody cares though, because the man's a genius, and makes food that is absolutely to die for. Everyone just called the restaurant "That place at the end of Maple" for years, until Pierre decided the joke was hilarious, and changed the restaurant's name, formally, to At the End of Maple.

Whatever the name, this is THE restaurant in town – where anyone who's anyone is seen dining. Celebrities, politicians, philanthropists, foodies, they all wait and wait for than chance to get a table. Tonight is a special night – C.J. Charles, the most discerning and respected restaurant critic in the business, is dining here and will write a review.

Most of the staff came in at 10 this morning to make sure all the preparations were in order, and took a break between 2 and 6pm, in time for the dinner service to start.

When they arrive though, Pierre is sprawled on the floor of his kitchen, in a puddle of beet soup and blood. Pierre was a gifted chef, but he made enemies. Who hated him enough to kill?

Get ready for an evening of delicious food, scandals started and revealed, and murder – and join us at The Food is to Die For!

The Food is to Die For lasts for about four hours and is suited to an evening. It is often played over a meal – a finger buffet if possible to allow guests to circulate and talk in private.

The free introductory pdf file contains an introduction to the game, a cast list of all the characters, and a copy of the Herald's lifestyle section – plus details of how to buy the game.

These are the characters in The Food is to Die For:

The Food is to Die For is unlike many murder mystery games. Although the game starts with a murder, most of the characters have more important things to do than to investigate it. And the killing may not be over – it is unlikely that everyone will survive the remainder of the evening!

On the evening of the game the guests are met by the organizer and welcomed to At the End of Maple. They then receive their detailed backgrounds – including dark secrets, objectives and money. The fun then begins as they form alliances, blackmail each other, steal items and maybe even try to murder one another! Along the way they may uncover some of the mysteries of The Food is to Die For. Who is working for the Mob? Who is here under a false identity? Who is stealing wine, and who is defrauding the restaurant accounts? And, of course, who killed Pierre Baudelaire? Depending on what the players choose to do, there are several different possible endings, but finally everyone finds out how they did, and what secrets everyone else was concealing.

Purchasing The Food is to Die For

The Food is to Die For costs US $29.99. You can buy it from anywhere in the world. The price will be converted back into your own currency for you, at today's exchange rate.

We offer a Cast Iron Guarantee on all our murder mystery games. If you're not completely satisfied with The Food is to Die For then please let us know within 30 days and we will refund you. See our full terms and conditions here.