Here's what people have been saying about The Reality is Murder:

"We just finished The Reality is Murder with 30 players and 2 GMs, and it was excellent! Not sure if the big money prize went to the most deserving winner (or even to the actual winner), but there were certainly enough intrigues, secret identities, extortion, betrayals, love triangles, live TV drama, proposals, and marriages. The "live" TV broadcast that we all contributed to would certainly have been worth seeing; pity that we did not actually film it…"
Petter Olsen, Norway

"I love the complexity of The Reality is Murder! I think it keeps things interesting, and no one ever feels bored during the night. I also love all of the surprises and reveals at the end of the night. I had a great time, and I know the other 32 people did too!! Would definitely consider using Freeform if I ever host another murder mystery party."
Derek Smith, USA

"We hosted The Reality is Murder this past Saturday night and everyone (all 30 characters!!) seemed to have a blast!"
Jeremy Gustafson, USA 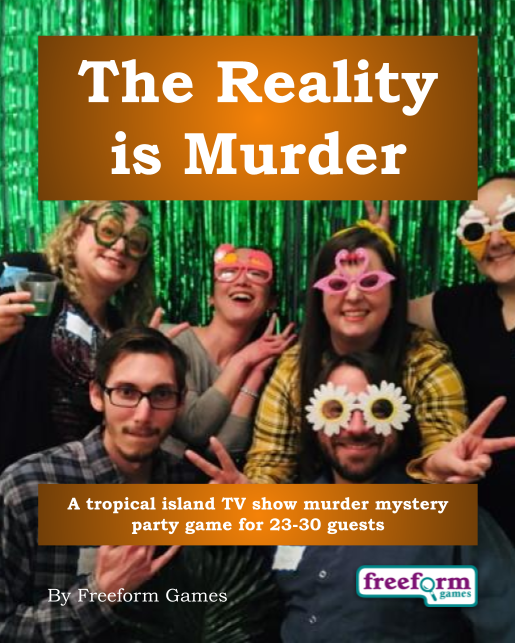 Recommended for ages 18+
Costs US$49.99
Written by Freeform Games

The Reality is Murder is a murder mystery party game for 23 to 30 guests and one or two hosts – download the free introductory pdf file.

Join us in an exciting evening of reality television and murder. You will be in the middle of the action and it will be up to you to wheel and deal with the other guests. Can you achieve your goals, keep your secrets hidden and survive The Reality is Murder? It's up to you.

It is 2003 and Tribal is Network 123's reality show where 12 people live on Moko Shanti, a beautiful tropical island for up to 40 days. Every few days, contestants vote each other off the island during Tribal Meetings. Now, only three contestants are left, and tonight is Tribal's finale.

Tonight, everyone has returned to the beach where the final Tribal Meeting will be broadcast live and the winner of the $1,000,000 prize will be decided.

Unfortunately, all is not well. Jeff Thompson, Tribal's creator and director, has been found dead on the beach – a machete embedded in his chest… Find out who killed Jeff Thompson in The Reality is Murder.

The Reality is Murder lasts for about four hours and is suited to an evening. It is often played over a meal – a finger buffet if possible to allow guests to circulate and talk in private.

The free introductory pdf file contains an introduction to the game, a cast list of all the characters, and a copy of the The Islander – plus details of how to buy the game.

These are the characters in The Reality is Murder:

The Reality is Murder is unlike many murder mystery games. Although the game starts with a murder, most of the characters have more important things to do than to investigate it. And the killing may not be over – it is unlikely that everyone will survive the remainder of the evening!

"Keep up the good work … no one makes scripts like yours."
Nicole Brownlee, USA

On the evening of the game the guests are met by the organizer, the Events Manager, and welcomed to Moko Shanti. They then receive their detailed backgrounds – including dark secrets, objectives and money. The fun then begins as they form alliances, blackmail each other, steal items and maybe even try to murder one another! Along the way they may uncover some of the mysteries of The Reality is Murder. Who will win Tribal? Who are ANTHRO? And of course, how did Jeff Thompson die? Depending on what the players choose to do, there are several different possible endings, but finally everyone finds out how they did, and what secrets everyone else was concealing.

Purchasing The Reality is Murder

The Reality is Murder costs US $49.99. You can buy it from anywhere in the world. The price will be converted back into your own currency for you, at today's exchange rate.

We offer a Cast Iron Guarantee on all our murder mystery games. If you're not completely satisfied with The Reality is Murder then please let us know within 30 days and we will refund you. See our full terms and conditions here.