Here's what people have been saying about Christmas Lies:

We don't have any stories about Christmas Lies yet – why not run the game yourself, and send us one to print here? 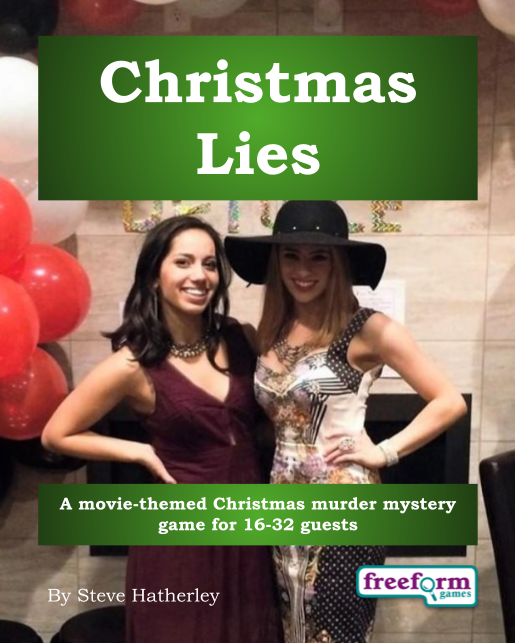 Christmas Lies is a murder mystery party game for 16 to 32 guests and one or two hosts – download the free introductory pdf file.

As a special holiday treat, we now have a Christmas version of our ever-popular Hollywood Lies game

Join us in a thrilling evening of murder, blackmail, and movies. You will be in the middle of the action and it will be up to you to wheel and deal with the other guests. Can you achieve your goals, keep your secrets hidden and survive Christmas Lies? It's up to you.

Despite this note of sadness, celebrations are in full swing at the Christmas Confidential post-award party. Deals are being cut for future productions and everyone is having a good time enjoying the atmosphere and mingling with Hollywood's movers and shakers.

Is there anything suspicious about Tom Speed's death? Who will win next year's Santas? Find out at Christmas Lies.

Christmas Lies lasts for about four hours and is suited to an evening. It is often played over a meal – a finger buffet if possible to allow guests to circulate and talk in private.

These are the characters in Christmas Lies:

Christmas Lies is unlike many murder mystery games. Although the game starts with a murder, most of the characters have more important things to do than to investigate it. And the killing may not be over – it is unlikely that everyone will survive the remainder of the evening!

On the evening of the game the guests are met by the organizer, the Master (or Mistress) of Ceremonies. They then receive their detailed backgrounds - including dark secrets, objectives and money. The players can form alliances, blackmail each other, steal items and even try to make the best movie for next year. Along the way they may solve some of Christmas Lies's mysteries. What is the Post-Modern Freeform Movement up to? Who will get tickets to the charity ball? What really happened on the set of Snow Business? Which script will be made into a movie? And of course, how did Tom Speed die? Finally, the game concludes and everyone finds out how they did, and what secrets everyone else was concealing.

Christmas Lies costs US $49.99. You can buy it from anywhere in the world. The price will be converted back into your own currency for you, at today's exchange rate.

We offer a Cast Iron Guarantee on all our murder mystery games. If you're not completely satisfied with Christmas Lies then please let us know within 30 days and we will refund you. See our full terms and conditions here.