Here's what people have been saying about Halloween Lies:

"Had a superb time last night playing Halloween Lies. We've done several Freeform Games murder mysteries for my birthday and this year, hubby decided he'd like a freeform birthday too. We chose Halloween Lies because, being October, we figured costumes and decorations would be easy to find. We had such a fantastic response, we had to buy the expansion pack (although I have to say, as host this made planning envelopes etc much more complicated and some characters were worried that they didn't have as much info as others). The costumes were utterly amazing and, due to the unseasonable weather, much of the game was played in the garden! I have to be honest and say that folk were not that interested in making movies, but as always the format and fab writing enabled both newbies and old hands to get totally engrossed and people who had never met before were very soon in deep conversation. I love freeform MM's – they are the mainstay of some of the very best parties we have hosted over the years. Thank you."
Clare Rogers, United Kingdom

"We wanted ease of finding costumes (anybody can come up with a Halloween costume), plus a large party of 20+ people, plus Halloween Lies sounded more involved/interactive, less rigid structure than out of the box type murder mystery games. All the guests seemed to have enjoyed themselves – people thought the movies section was the funniest!"
A Customer, Canada

"I chose Halloween Lies because I have played Freeform Games before and LOVED them! All your games have been WONDERFUL! They play themselves for the most part!"
Dorothy Mortimore, Wyoming, United States

"I just wanted to let you know how much of a great time we had at my husband's 30th Halloween Birthday Party. My friend Zoe and I hosted Halloween Lies for Jim's 30th celebration. We decked out Club Hellfire (a name that will stick) in halloween decorations, sounds and effects. There was a zombie head cake, a professional face painter, graveyard, photo booth, black lights, cobwebs everywhere, spooky music playing and smoke coming from the witches brew. The witches, zombies and assorted wicked beings began to arrive and their characters packs made more sense as they received further information. After some giggling at costumes, photos were taken, an introduction and we were away! No messing around, everyone was straight into the game. There were some devious love triangles, a mafia boss breaking arms and a killer hiding under the radar. The producers sourced their directors, cast the actors and found screenplays and the movies were set into motion. Everyone had such a great night, I could barely tear them away from the game to get photos! The movies were hilarious and really just capped off the murder mystery nicely. Thanks for such a great murder mystery, this is our second, and I'm determined to have one for every birthday!"
Emma-May Palmer, Australia

"Halloween Lies is really such a fun game because of the delight people have when getting into Halloween costumes."
'Slime' , United States 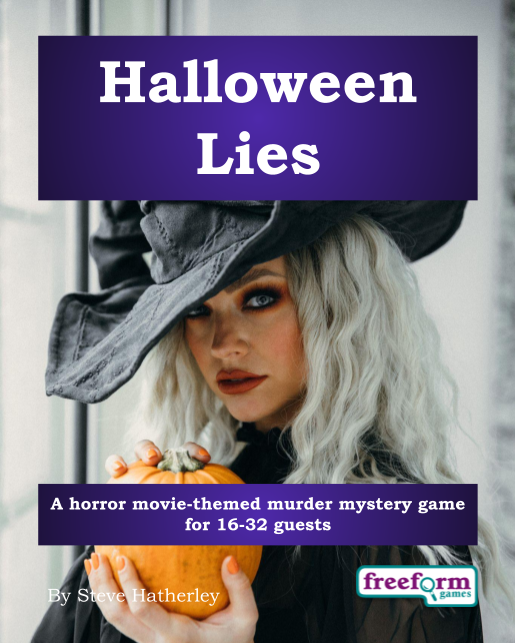 Recommended for ages 12+
Costs US$49.99
Written by Steve Hatherley and DeAnna Knippling

Halloween Lies is a murder mystery party game for 16 to 32 guests and one or two hosts – download the free introductory pdf file.

Join us in a thrilling evening of scheming, intrigue and skulduggery. You will be in the middle of the action and it will be up to you to wheel and deal with the other guests. Can you achieve your goals, keep your secrets hidden and survive Halloween Lies? It's up to you.

It's award night and Tom Speed's latest film, The Vampire Detective, has just swept the board and garnered four Skellies – for Best Picture, Best Actor, Best Director and Best Screenplay. Sadly, Tom Speed's award for Best Actor was accepted posthumously by his friend, Hayden Vicars, as Tom was killed in a driving accident late last night.

Despite this note of sadness, celebrations are in full swing at the The Vampire Detective post-award party. Deals are being cut for future productions and everyone is having a good time enjoying the atmosphere and mingling with Hollywood's movers and shakers.

Is there anything suspicious about Tom Speed's death? Who will win next year's Skellies? Find out at Halloween Lies.

Halloween Lies lasts for about four hours and is suited to an evening. It is often played over a meal – a finger buffet if possible to allow guests to circulate and talk in private.

"Great game! Lots of fun! You have great customer service and I would recommend your site to anyone."
Susie Lloyd, Pennsylvania, United States

These are the characters in Halloween Lies:

Halloween Lies is unlike many murder mystery games. Although the game starts with a murder, most of the characters have more important things to do than to investigate it. And the killing may not be over – it is unlikely that everyone will survive the remainder of the evening!

"Halloween Lies was the BEST because all the characters had lots to do, were essential for the plot, intermingled and lots of subplots were happening at once."
A Customer, United States

On the evening of the game the guests are met by the organizer, the Master (or Mistress) of Ceremonies. They then receive their detailed backgrounds - including dark secrets, objectives and money. The players can form alliances, blackmail each other, steal items and even try to make the best movie for next year. Along the way they may solve some of Halloween Lies's mysteries. What is the Post-Modern Freeform Movement up to? Who will get tickets to the charity ball? What really happened on the set of The Snow Beast? Which script will be made into a movie? And of course, how did Tom Speed die? Finally, the game concludes and everyone finds out how they did, and what secrets everyone else was concealing.

Halloween Lies costs US $49.99. You can buy it from anywhere in the world. The price will be converted back into your own currency for you, at today's exchange rate.

We offer a Cast Iron Guarantee on all our murder mystery games. If you're not completely satisfied with Halloween Lies then please let us know within 30 days and we will refund you. See our full terms and conditions here.