You can buy our games in US dollars or in UK pounds, from anywhere in the world, as you prefer. The price will be converted back into your own currency by your card issuer or by PayPal.

You can buy our games in UK pounds, from anywhere in the world. The price will be converted back into your own currency by your card issuer. 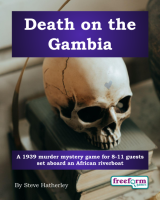 Death on the Gambia costs £20.00 (GB pounds) or US $29.99. You can buy it in either currency, from anywhere in the world, as you prefer. The price will be converted back into your own currency for you, at today's exchange rate.