It may seem a bit of a surprise, given that I write, edit and publish murder mystery party games, but I read very little crime fiction. I don’t really enjoy them, and I don’t find them that useful as inspiration because in our games, the murder is often just one of many different plotlines. Also, in crime fiction the murder plot is often so difficult to unpick that we couldn’t write our games that way. In our games, we can’t rely on the brilliant detective solving the mystery – everyone has to have a fair chance. 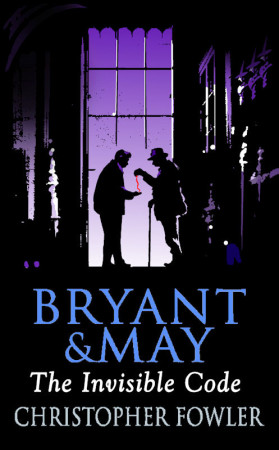 So I read very little crime fiction. I don’t even watch that much crime drama on television.

Bryant and May head up the Peculiar Crimes Unit (PCU), a much-maligned unit that the Home Office would love to shut down – except for the PCU’s incredible success rate at solving strange crimes that nobody else can solve. John May is procedural and proper, while the Arthur Bryant eschews traditional detection methods and consults with witches, occultists and other fringe characters.

Arthur Bryant is possibly my favourite fictional character: blunt, eccentric, erudite, rude, esoteric – and often laugh-out-loud funny. John May is Bryant’s straight man, and while the rest of the PCU team have their moments, none are as memorable as Bryant.

In The Invisible Code, the PCU are investigating yet another bizarre murder and become embroiled in a sinister conspiracy of silence concerning key government figures. And I’m not going to say more than that, because I don’t want to spoil it for anyone.

Each of the books can be read on their own, but there’s a definite sense of time in the later books (from White Corridor onwards) as the PCU relocate to new offices and new characters are introduced.

If you’re interested in reading more, I wouldn’t start with the first in the series, Full Dark House. Full Dark House chronicles Bryant and May’s first meeting during the London Blitz, but to enjoy it fully you really need to know who the characters are in the first place, as it recreates the Blitz through flashbacks.

So instead, I suggest starting with the second book, The Water Room. The Water Room is quite bizarre, and definitely my favourite of the series – if you don’t like The Water Room then you probably won’t like the rest. I’d then follow that up with Seventy Seven Clocks (third in the series), before returning to Full Dark House.